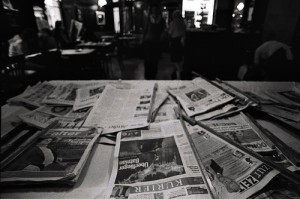 Why do we like what we like? Yes, it’s a big question, possibly best addressed in a philosophy seminar. But it has political implications, as Michael Washburn pointed out in his recent post on the VIDA study and why he, as a book critic, has only reviewed a handful of books by women compared to dozens by men. Perhaps a better, and more direct, question should be: What criteria, whether consciously or not, do we use when evaluating anything from non-fiction books to newly released movies ?

For the past three years, I’ve had the honor of sitting on a committee that evaluates social justice journalism and gives awards to the best submissions of the previous year. The award, named for James Aronson, a former professor at Hunter College and lifetime advocate of social justice writing, has been given each year for the past 21 years. And the roster of winners includes some marquee names in the field: Amy Goodman, of Democracy Now!; Seymour Hersh, of the New Yorker; Paul Krugman, of the New York Times, and many more. The list also includes some writers you’ve never heard of, but whose work is just as good. Publications, too, have ranged from the glossy, big-media corporate outlets to small, independent newspapers and magazines around the country.

Evaluating a submission from a famous journalist, whose work appeared in an even more famous publication, alongside an unknown writer from an unheard-of daily in Montana poses certain challenges. How do you establish a level playing field ? What criteria should be used in assessing the merits of one submission against another? Can anyone ignore the cache of a big name in the spirit of objective analysis?

Obviously, this is a quandary that presents itself to all of us, whether we realize it or not. Why does one alt-country rock band go platinum with each new release while others, maybe just as good, languish in their local bar’s venue year after year? Same for film, restaurants, fiction, and fashion. Life’ s not fair. Nothing new there.

But that’s where being on such a committee as the Aronson presents an opportunity: to establish certain standards of evaluation and to endeavor to follow them regardless of whose name appears at the top of the page. Then the question becomes, what are those standards ?

For me, and for the purposes of this award, they’re fairly simple: the work must illuminate a social problem, provide research and factual support, and be exceptionally well written. Form and function cannot be isolated from one another. I have passed on important exposes that lack narrative flow, and I’ve seen beautifully written stories of terrible situations be rejected for being slight on the “next-step” element, or suggestions on where to take the information therein.

The point is, I try to be fair, and I apply the same standards to the New Yorker as I do the High Country News. And I believe I do a good job. But can any of us, really, be sure?

Previous post: How does it feel to be a problem? The Vida Study