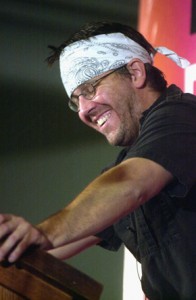 Well, no — it’s not new — but it’ s new to u s. Th is week’s New Yorker features a previously unreleased short story, titled “Backbone,” by David Foster Wallace, who committed suicide in 2008. The author of Infinite Jest allegedly struggled for years to surpass that achievement, which made him very, very famous in 1996. He had already published numerous works of fiction and nonfiction, but it was Infinite Jest that etched Wallace’ s name on the wall of literary hi story.

I was never a fan of that particular novel, but I have long admired Wallace’s nonfiction. His 2001 essay “Tense Present,” for Harper’s, remains one of the smartest pieces of writing on the politics of American English I’ve ever come across. According to some, it was that brainpower, mixed with sometimes overwhelming depression, that brought his demise. As a friend of mine who knew Wallace in college, at Amherst, put it: “He was just too smart.”

While I’m not sure anyone can be too smart, I have no doubt that some sensibilities are simply not equipped to deal with life as it is. It’s not for me to say whether David Foster Wallace fit that description, but anyone who’s read him can surely attest to the man’s brilliance.

This new story comes out just over a month before Little Brown releases the unfinished novel he was working on when he died, “The Pale King.”