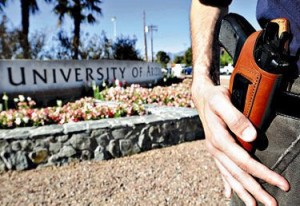 In the wake of January’s shooting just outside Tucson, Arizona, lawmakers in that state are trying to push three bills through the legislature that would allow professors and students over 21 to carry guns on the state’ s college campu ses. The rationale, of course, is that people should be prepared to defend themselves the next time a deranged and troubled person decides to open fire on an unsuspecting crowd.

I’ve written about gun control issues in the past, and gotten into some hot water with staunch advocates of gun ownership. This is not a topic that people take lightly, and for good reason: for some, guns equate barbarism, while their proponents view them as symbols of a uniquely American freedom.

And not all advocates of gun ownership fit the stereotype that liberals often imagine, that of a redneck spitting chaw out the window of his Ford pickup truck. Some are downright smart, and their arguments can be pretty compelling. The journalist Dan Baum, for example, wrote about* why he carries a gun for Harper’s last year — not the first place you’d imagine such an article to be found.

Regardless of your position, what better opportunity could we ask for to parse out the academic arguments for and against gun ownership than the suggestion that we allow guns in academic environments?

It’s reminiscent of the controversy that erupted in June of 2009, when a pastor in Louisville, Kentucky urged his congregation to bring their guns to church. Ken Pagano, an Assembly of God minister at the New Bethel Church there, delivered a sermon two weeks prior titled “God, Guns, Gospel, and Geometry,” arguing that not all Christian denominations are pacifist. Some Christians begged to differ then, and plenty of academics are equally opposed now. Indeed, the University of Arizona, Arizona State, and Northern Arizona University have all expressed opposition to the bills. But gun lobbyists — who carry a lot of power in Arizona (no pun intended) — aren’t fazed.

In an academic environment, dedicated to the pursuit and creation of knowledge, how can anyone justify something as ana thema to that as packing heat ? Academia is where ideas are discussed, debated, and analyzed. Can free and open discourse exist where firearms rest beside books ?

*This link will take you to a Website that contains a link to a PDF of the article, which I have tested and confirmed as safe.