A final tribute, in my words, to Hillman Curtis 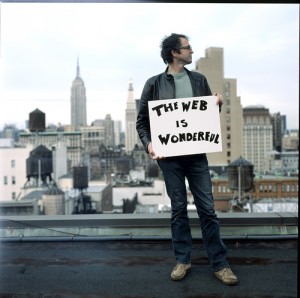 Here is a truth about ghostwriting that I never knew until now: You can write about practically anything in the first-person — except death.

One week ago today, an old friend died after fighting cancer for three and a half years. He was just 51 and had a wife, two young children, and countless friends scattered all over the world. He was famous enough for his obituary to be featured in Saturday’s New York Times. And he was the only other person in the world, besides myself, whose life, ideas, and work I have discussed using the word “I.”

He was Hillman Curtis, a web designer-cum-filmmaker, and I was his ghostwriter.

We had become estranged in recent years, but I knew he was sick. In 2010, five years after our last book project together, he confided in me over email that he “had a bad case of cancer.” It was meant as a joke, an allusion to one of his favorite films, The Royal Tennenbaums. Hillman liked to lighten the mood whenever possible, but I didn’t catch it. I was too much in shock. He had reached out to me much like he always had: seemingly on a whim, with an idea for a project that he wanted my help with. That’s how Hillman worked with everyone.

Only this time, the project didn’t involve a book — we wrote two together, one in 2001 and another in 2005 — but I’ll come back to that. The first time he emailed me, in May 2001, it was simply to ask if I might have time to help him structure his thoughts for a book on new media design he was writing. I had interviewed him a few months earlier for a magazine article about broadcast design, and apparently we’d hit it off. I was only 25. I jumped at the opportunity.

Thus began a unique kind of partnership. When he had time, he would write a mess of ideas — stream of consciousness, really — and then I’d turn the draft into a chapter. Other times, we’d simply sit and talk, and I’d record the conversation. Later, I would transcribe the conversation and write a chapter from that. I got to know him very, very well during this process. I internalized his voice, started using his expressions, and even went against my own literary judgement and ended a lot of sentences with ellipses (as he liked to do…)

The book was a success, and we worked on many other projects over the years. He would call me up, or email me, and say he needed my “special touch” on a piece of writing — usually copy for a website, a chapter for another author’s book about design, or a speech. Payment varied — once, when I was very broke, he paid my month’s rent, in addition to the fee we had already established. In 2005, we wrote a second book, about digital filmmaking, a field he waded into and then immersed himself in during his last decade of life, ultimately replacing his web design work with artist documentaries, commercials, and short narrative films. He was a self-described “serial self-reinventor.” And he was successful at practically everything he put his mind to.

Except for the last project he tapped me for, in 2010. He wanted me to train him for a half-marathon. He had begun chemo, he explained, and he was often very tired. He needed something to focus on, and someone to “kick his ass,” as he put it. He even offered to pay me.

I never said no to Hillman, and not because I was afraid to say no. When he asked someone to do something for him, it was usually a tremendous opportunity. “Do you have time to help me write a book?” Of course. “I just got this new film equipment; will you help me make a documentary about David Byrne?” Are you kidding? Yes. “Will you give me something to look forward to three months down the road, and an excuse to get out every day and breathe fresh air, talk about life, and simply enjoy being alive?” Absolutely.

But this time, Hillman didn’t follow through. We exchanged many emails about running. I advised him, developed a modest schedule for him, and encouraged him every time he reported back about a run he had completed. But we never met to go running in Prospect Park, as we’d planned on doing twice weekly, nor did he ever run a half-marathon.

I never pressured Hillman. When he was reluctant to begin our second book together because he didn’t quite know what kind of book he wanted to write, I waited — for two years, and through many false starts in the meantime. And so, when he faltered on the running, I didn’t “kick his ass,” as he’d asked. After all, he was dealing with a bad case of cancer.

Maybe I let him down. Maybe he wanted me to be Mickey to his Rocky, showing tough love from the side of the road, stop-watch in hand, as I shouted his quarter-mile splits. But I just didn’t have the heart for that.

A lot of people knew Hillman, and many more respected him. He revolutionized the web. He helped untold numbers of young designers find their way. And he gave a few of us, those lucky enough to have worked closely with him, opportunities of a lifetime.

I wish that I could ghostwrite a goodbye from Hillman, channel his voice one last time. But I can’t. Even so, if I were able to suggest the idea, I think I know exactly what he’d say: “Right on.”

Previous post: The book vs. the app — a tired, boring debate