Surrounded by Water, Upended by Land 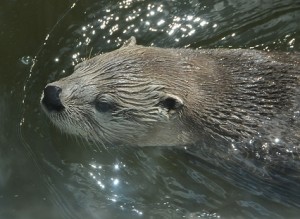 The day my short story collection Surrounded by Water became available for pre-order, I saw an unusual body along the highway.

Not banded like a raccoon or delicate like a cat. This was large, like a dog, but with feetish black things, and an eye-catching chocolate brown coat. I had to u-turn around to look again. There, along the highway, high above the water and far from the river, was a dead otter. With thick beautiful fur, he was almost as large as my dog, and must have just been killed.

River otters are adorable, with curious little faces I’ve seen take quick peeks at me while kayaking. They’re extremely shy and rarely seen. To get to the highway, to be hit by a car, this fellow had to travel over a half mile – I tested it by car – and through a vineyard. What was he doing, going so far from home, surrounded not by water, but by land, troubled me.

“Lust” was my vet’s answer. “Spring. Kicked out of the nest and was looking for a girlfriend.” The otter may have traveled via seasonal swollen creeks, dry as dust in summer, damp and swampy in winter.   The vet also warned me that their cuteness is deceiving. “Try to hug one and it would be like hugging a chainsaw.”

I found it sad, interesting, unique and timely that I noticed him, a displaced river creature, the day of my book’s official “birth”. Surounded by Water is named from “While Surrounded by Water” a story inspired by flooding events along the Russian River  – I’m still shocked and thrilled to mention, won the Glimmer Train Fiction Open Award.

Naively, I hoped the county would remove the otter immediately, his glorious fur intact and somehow give him a proper burial. Instead, several times a day for the next week or so I drove past his bloated body, one leg jutting in the air. Curiously, birds didn’t seem to be tearing him apart. I looked for him when I went past, hoping to see him gone, yet, oddly relieved when he was still there, associating him with the elation brought on by that first day of my book.

Having sent my own “baby” out of its nest, the excitement also brought along an avalanche of apprehension; will the world like my stories? As I reveal my own soft underbelly, I questioned, will Surrounded by Water find favor with reviewers? Will the poor thing, enamored with spring and enthused to greet the world, cross the highway, far from home only to have one daily admirer, morbidly driving by, checking on its progress?

Or, better yet, my little collection of stories, newly released to the planet, would it bob up now and then to surprise a solitary traveler? Here’s hoping.

Stefanie Freele is the author of “At the Foot of the Mountain, the Inexorable” in the Spring 2007 issue of Contrary. Her collection, “Surrounded by Water,” is just out.

Previous post: A final tribute, in my words, to Hillman Curtis