How Gary Coleman taught me to read 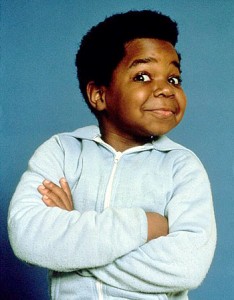 There’s an episode in the final season of Diff’rent Strokes in which Arnold (Gary Coleman) acts up in class and is challenged by his teacher, played by Kareem Abdul Jabbar, to teach a lesson one day. His topic is to be A Tale of Two Cities by Charles Dickens, and he doesn’t want to do it. But he forces himself to sit down with the book, and is soon glued to its pages, his eyes wide with wonder.

I was 9 years old at the time, and not a big reader — I preferred playing in the mud. But seeing Arnold’s face light up made me want to read — more so than any teacher I had. Soon, I was devouring books by Laura Ingalls Wilder and Judy Blume, and within a year I began writing my own stories.

But that was almost 30 years ago, and according to new research by a neuroscientist at Tufts University, we’d be unlikely to see such a plot line today. The culprit: the Internet.

Even if Arnold’s adoptive father, the Park Avenue sophisticate Mr. Drummond, were to stow Arnold’s iPad, Macbook, and Kindle in a secret place and strap him to a chair and pry his eyes open, Clockwork Orange-style, with Dickens’ novel six inches from his face, Professor Maryanne Wolf suggests that Arnold would not become engrossed in its pages, transported mentally to London or Paris, but simply bored — or worse, irritated, confused, and even depressed.

In a recent article in the Washington Post about Wolf’s research, Michael Rosenwald writes that the scanning, scrolling, and rapid clicking through pages that Internet use encourages hasn’t just affected our attention spans; it’s fundamentally changed our neural wiring.

Rosenwald quotes Andrew Dillon, a professor at the University of Texas who studies reading: “We’re spending so much time touching, pushing, linking, scroll­ing and jumping through text that when we sit down with a novel, your daily habits of jumping, clicking, linking is just ingrained in you,” Dillon said. “We’re in this new era of information behavior, and we’re beginning to see the consequences of that.”

The consequences are that people can’t read anymore. Or at least not in the way portrayed by Gary Coleman in Diff’rent Strokes. Rosenwald writes that literature professors from around the country have reported that their students have serious difficulty with the “classics” — sentences with multiple clauses, convoluted syntax, and challenging vocabulary become insurmountable barriers to reading comprehension.

Wolf mentions Twitter: “How much syntax is lost [in those 140-character bursts], and what is syntax but the reflection of our convoluted thoughts?” she asks. “My worry is that we will lose the ability to express or read convoluted prose. Will we become Twitter brains?”

I’ve noticed this myself, in the journalism classes I teach. I often assign articles from the New York Times, The Atlantic, Harper’s, and other publications that don’t avoid semicolons. Sometimes the articles are long — more than 3,000 words — but they aren’t novels. And yet, students often don’t read them, or if they do, they frequently fail to grasp their subtleties (or even their main points).

They say the articles are “boring” and “too long.” I counter that maybe they didn’t spend enough time letting the articles work their magic on them. Sure, you can scroll down a list on Buzzfeed in 12 seconds, but will it transport you to another time and place?

I’m not naive. I know that technology is only going to take us further from the sort of reading I grew up with. But as Wolf suggests, we need to be vigilant in training kids’ minds — and our own — to be “bi-literate.”

“We can’t turn back,” she told Rosenwald. “We should be simultaneously reading to children from books, giving them print, helping them learn this slower mode, and at the same time steadily increasing their immersion into the technological, digital age.”

Even Wolf admits that reading is harder for her than it once was. She recently tried reading The Glass Bead Game by Herman Hesse after a full day in front of the computer, and she couldn’t do it. She tried again the next night, and it still hurt. On the third night, she turned off all her gadgets and forced herself to try again, and it was slightly better.

In the end, it took her two weeks to read the 558-page novel, but by the end of the second week she told Rosenwald that she “had pretty much recovered myself so I could enjoy and finish the book.”

“I found my ability again to slow down, savor and think,” she said.

I, meanwhile, don’t read nearly as much as I used to either, and spend far too much time online. I have to for work, and I love what the Internet has to offer. But like Wolf says, I also don’t want to lose that part of myself that can get lost in a great book. Sometimes, I just need a little inspiration.

And to this day, for me, that inspiration remains Gary Coleman’s face as he read A Tale of Two Cities.