by Amanda Leigh Lichtenstein on April 7, 2014 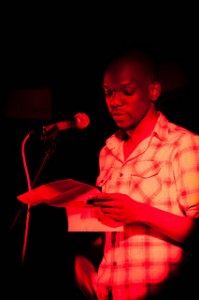 We know a good story can change us. But can our stories really change society?

Writers, poets, journalists, arts educators, and cultural activists based in and around Dar es Salaam, Tanzania convened on Saturday March 8 at Soma Book Cafe to explore the link between art and social change in a one-day workshop organized by Twaweza Tanzania, a citizen-centered initiative focused on large-scale change, Soma: Leisure Culture and Learning, building a reading and writing culture, and Maneno Express, an online initiative to promote creative expression in the year leading up to Tanzania’s 2015 presidential elections. Vijana FM, Center for Development East Africa (CDEA), Ujamaa Hip Hop Darasa, The Citizen, Jua Arts Foundation, Waka Poetry Consortium, La Poetista, as well as Mkuki & Nyota Publishers were just some of the organizations represented at this diverse gathering.

Guest speaker Billy Kahora, editor of the critically acclaimed KWANI? literary journal based in Nairobi, Kenya, flew to Dar es Salaam for the event to spark new thinking on the role that artists play as change-makers in society.

The history of KWANI itself reveals the possibilities and tensions between the arts and public life. In 2001, a small group of writers such as Binyavanga Wainaina and Yvonne Adhiambo Owour had returned to Kenya from extended stays abroad and began to debate the political and social climate under then President Daniel Arap Moi. While they respected prominent authors like Ngugi wa Thiong’o who spoke out against British rule, colonialism was no longer the direct cause of the social issues they experienced then, yet very few writers were writing about taboos like HIV, youth apathy, and corruption. They declared a “death of creativity,” lamenting that Nairobi lacked creative spaces to write and debate, and wondered if they could produce new writing that would be taken seriously by the public.

By 2003, Wainaina determined to publish the eponymous anthology of Kenyan writing that provoked new thinking on social realities rarely expressed in Kenyan literature. The first edition of KWANI? generated new creative energies and confirmed for Wainaina and others that their work could have real impact on shifting the social landscape in Nairobi. Wainaina promptly established an office and continued to publish issues of KWANI? as well as organizing monthly open mic sessions. KWANI? challenged traditional notions of quality literature by publishing writings in Sheng, a mix of Swahili and English, and featuring writers addressing social issues and personal experiences rarely shared in public.

According to Kahora, who was trained as a journalist in South Africa and joined KWANI in 2006, this work has not been easy. KWANI has thrived as a literary hub, proving that literature may exist “beyond borders,” but Kahora admits that most artists and writers are individuals who brought “huge creative jealousies” to the process, challenging everyone involved to think creatively about collaborative practice and the social benefits of working together against the status quo. What early participants in KWANI shared in common was a collective anger against traditional publishers, a troubled nation, a limited media, and an insular academy. By channeling this anger into action, they were able to forge a space for new narratives and stories that transformed the way that people experienced their own lives.

Between 2007-2008, when Kenya broke out into post-election violence, Kahora describes this time for KWANI as a time to “grow up” and claim KWANI’s right to “write what it wants,” against all odds. This kind of writing requires the writer to be “close to the ground, not distanced from social change” but a direct part of it. Writers were encouraged to shift away from the abstract to focus on the raw realities of a Kenya gripped by political violence. Some of these writers formed ‘Concerned Kenyan Writers’ to respond to this violence and partnered with photographers to produce publications that revealed the painful truths about this period. KWANI also began publishing stories that highlighted characters like Daniel Munyakei, a Central Bank of Kenya clerk embroiled in a corruption scandal who signed the vouchers for billions of Kenyan shillings siphoned for personal gain. Billy Kahora, the author of The Story of Daniel Munyakei, risked telling the story of this whistleblower because he felt Daniel was the perfect “microcosm to describe Kenya’s major issues.”

Kahora insists, however, that the aesthetic should never be sacrificed for the sake of social change. “Writers deal with the human — we have to ask ourselves, what kind of narrative do we want to tell,” and how can we tell it best? Never surrender art — or questions of beauty — for the sake of changing the society.” Writers can speak to sexualities, violence, corruption, ethnicities, and other taboos, but the power of a good story is an act of social change itself.

After listening to Billy’s provocative talk, participants broke into small groups to address four framing questions on the arts, community, youth and change. Tanzanian artists and writers seek validation for their work and often struggle to share alternative voices or viewpoints because of a lack of creative space and alternative media. It was agreed that artists and writers want and need to collaborate to promote new initiatives like Moto: A Writer’s Circle, La Poetista/Poetry Tanzania, Ujamaa Hip Hop Darasa, Poetry Addiction, Lyric Lounge, Waka Poetry Consortium, and advocate for more spaces and initiatives in Dar es Salaam and beyond. Risha Chande, of Twaweza, says “public space is a huge opportunity to disrupt patterns and trends to create new dynamics. This includes social media to promote new collaborations and organizations.”

The question is, what are the stories in Tanzania that are not yet being told?

Vitali Maembe, socially-engaged musician and arts educator who founded and leads the Jua Arts Foundation in Bagamoyo, a rapidly changing historic town just 70 kilometers north of Dar, insists that “artists interested in social change must be willing to make sacrifices.” Writers and artists must deal with the paradox of struggling against systems that they depend on to make a living. They face competing pressures from the tourist industry, commercial media, government legislating agencies, and even their peers to produce work that satisfies the status quo.

To create new narratives, Kahora encouraged Tanzania’s writers and artists to “harness youth energy” and encourage stories that are collaboratively created and shared across alternative and mainstream media. At the same time, the creative expression community must be able to develop their own voices and talents, learn new techniques, critically debate social issues, and rebel against structures and systems that silence or inhibit. Neema Komba, La Poetista co-founder and one of the poets who organizes Woman Scream International Poetry Festival in Dar es Salaam, insists that poets “must develop their inner voice and trust in its value to society” first and foremost. To create authentic, inspiring works of art that reflect myriad realities, it takes courage and community — courage to speak freely in languages and styles that best fit the story — and a supportive community to receive and grapple with these stories that hold up a mirror to the present moment.

Nancy Lazaro, co-founder of La Poetista, a monthly Open Mic night at Nyumbani Lounge, believes that “as artists, we need collective energy, to do things together, to bring the change we hope for.” Gerry Bukini, a Dar-based poet and educator, said that this meeting “really started a fire among artists and has raised some big questions about us as artists and our challenges.” Demere Kitunga, founder of Soma, insists that often change happens when we consciously  “organize to destabilize hegemonic power,” and focus on the stories we want — and need — to tell future generations.

It was an energizing day of dialogue, but the real work happens through continued conversations and collaborations. Organizers are working on the creation of an online, interactive digital map of creative expression initiatives, projects, and organizations happening in Dar es Salaam and beyond. As Tanzania is on the cusp of major political, social, and economic changes, it is clear that artists, writers, and creative expression folks have a major role to play in transforming society, one word, story, or song at at a time.

Next post: How Gary Coleman taught me to read