by Amanda Leigh Lichtenstein on December 9, 2013 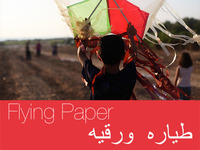 I recently watched a screening of the feature-length documentary film Flying Paper, directed by Nitin Sawhney and Roger Hill, at the Downtown Islamic Center in Chicago. Today I’m thinking about people around the world trapped in political nightmares and ideological wars waged beyond anyone’s reach. I’m also thinking about what the arts can do to tell those kinds of stories and what – if anything – changes once those stories are told.

Nitin, now a professor of media studies at the New School for Public Engagement, is co-founder of Voices Beyond Walls, established in 2006 to facilitate digital media and storytelling projects in Palestinian refugee camps. Flying Paper, Sawhney’s first feature-length film, follows the story of a group of children living in the village of Seifa in Gaza who are determined to break the Guinness World Record for the largest number of people flying kites simultaneously at a single time. Musa, the 13-year-old protagonist, is a charming, sparkle-eyed young man whose obsession with kite-making and flying is a love-affair with beauty itself.

Told in beats of animation and intimate documentary interviews, the film follows the kite-making mania from practice to the actual kite-flying competition, hosted by the UN Summer Games and UNRWA, United Nations Relief and Works Agency, who hold this competition every year to encourage world-record breaking feats from anxious kite-fliers around the world. In Gaza, where families live under constant threat of violence, this epic kite event is a diplomatic feat and the children featured in this film are truly inspired by the hope it stirs.

Musa talks throughout the film about kite-flying like an old sage, suggesting that to fly a kite is to believe in freedom. The kite reminds them that no one can confiscate their dream of liberation from the tyranny of occupation. Musa’s younger sister, Widad, who named her own kite “crescent moon,” explained that as long as a kite can fly, freedom is still possible. The kites fly beyond borders, defying political limits and state boundaries. The wind can not be politicized or puppeteer-ed. In a late-evening talk mid-way through the film, Musa insists that the kite is a metaphor for freedom and releases him from the traumas of war by helping him forget. Whether Musa arrives at this revelation on his own or with the help of conversations with the filmmakers, the comparison is moving and wise.

For Musa, Widad, and their band of cousins and friends, to make and fly a kite is to practice making a kind of freedom. Freedom can’t “take off” with holes in it, and like a kite, freedom often gets tangled in the trees, leaving its “makers” to “cut ties” and try again. Through kite-flying failures and triumphs, the children must stay attune to the conditions of the wind, negotiating with its temperament to keep the kite flying, much like politicians negotiate the conditions of peace. Often, the winds are not favorable. Freedom itself is an infinite, temperamental process of making.

The film is organized around the ultimate suspense of the UN Summer Games, but the kite-making scenes were my favorites. I loved watched Musa direct this enterprise with his gaggle of friends, from collecting the sticks to smoothing out the paper, preparing the wheat glue to designing an image, kite-making is a serious process at which point anything might go wrong. Early on, we watch Musa become very frustrated with some of his more “immature” buddies who carelessly fly a practice kite and end up damaging it. Musa knows kites and believes that kite-making has taught him that change happens step by step.

Musa is a lit-up leader of his kid-crew who recognizes the joy and happiness that comes from working as team. Ever seeking a new challenge, Musa decides he wants to attach a hidden camera to the kite to track its flight and problem-solves the best way to engineer it so it won’t fall. He credits his confidence and persistence to his grandfather, a kite-maker himself who says that kite-flying is in their blood, and thinks of kites as genes infused with wisdom passed down through the generations. Their serious approach to kite-making and their participation in the upcoming UN Summer Games reveals a family and a group of friends totally engrossed in the promise of caring about something in a context where their lives could end at any moment.

This is a story about kite-flying, but this is also the story of children in a perpetual war and occupation with no end in sight. The documentary’s treatment of the complex political circumstances is, for the most part, handled quite subtly, and allows ample space for the children to talk about their experiences in their own words. Abeer, an aspiring journalist who also happens to be a student in Voices Beyond Walls media programs, shuttles between roles as both an actor and crew member, interviewing everyone throughout with courage and curiosity. One of the most compelling conversations happens in a small bedroom, when five little girls pile up bed-side and talk with Widad about an earlier missile attack in Gaza that left them terrified, even though a few proudly stated that they weren’t scared. One admits, after a round of bravery, that all she wanted to do was find her mommy.

In crass parallel, the UN workers who represent the Summer Games complain that the “scale [of the event] is so stressful,” lamenting the round-the-clock organizing it takes to plan and execute it. No doubt, this event was challenging to organize but the comments made by the UN workers reveal the huge gap between the lives of refugees and those who organize their precarious existence. One UN worker boasts that a kite had been “embroidered by a Palestinian refugee” in an act of global solidarity through the UN’s vocational training programs. Another notes that the kites send a message to the “other side” of peace. I had mixed feelings while watching this team of earnest, imperfect adults wearing yellow hats trying to manage this event. I imagine that as individuals they believed in the power of kite-flying to build social cohesion and unity. However, the UN worker’s voices – of mild condescension, privilege, and detachment from the rawness of war – were disturbing.

Still – the Summer Games arrived. The scene was epic — a sunny beach full of children tugging on their kites, looking skyward with wonder. The film beautifully captures the massive beauty of this event, thousands of children on a beach dancing with the unpredictable winds to control their kites and keep them flying. War is the constant, kites are the experiment. Before the actual event starts, a few children gather to exchange stories, blaring Arabic orchestral music wafting through the conversation. “They used to take my uncles and grandpas away…!” Widad tells Abeer and the other kids listening. By the sea, boys in blue, girls in pink gather in clusters after their kites go down to talk with Abeer about their favorite kite designs and messages writ large across. One kite reads, “right to return” in Arabic script. Others marvel the images of hand-drawn stars and flowers flying overhead, some kites caught in rays of sunshine, while others are tangled up in wires.

Despite Musa’s genuine feelings of love, beauty, and faith in kite-making as a metaphor for life, I could not help but feel how contrived this event felt on some level in terms of the bigger picture. At the end of the day, those UN workers would always have a way out, while Musa and 7,202 eager, excited kids would most likely never have a way out of the conditions that had brought them all together that day. This is not to blame the UN workers or their efforts, or even to minimize the positive impact of an event like this, but it does call arts and diplomacy into question, and challenges the limits to which the UN functions to stabilize or create any sort of political change. The kids, who arrive by the sea in droves from all over Gaza, were totally obsessed with breaking this world record, but at the end of the day, even after successfully beating the record, we’re left viewing a lone boy amidst the smokestacks, trash and debris of thousands of kites that never made it off the ground.

While the directors don’t make an overtly strong political statement in this film, the intermittent animations done by Daniel Nienhuis throughout the film definitely produce necessary layers of tension in the overarching narrative, described as “uplifting” overall. The animations, accompanied by eerie sounds of impending doom, create an ominous layer of narrative featuring slow-moving kites over an aerial view of the Gaza region, competing for space with fighter planes above purple seas in a sinister sky full of gray clouds. The kite itself is like an animated character, traveling from place to place. I was a little confused about where and how the kite decides to stop, but was equally captivated by its capricious nature. At one point, the green monster rears its ugly head from the depths of the sea and eats away at the kite’s string, leaving us to draw our own conclusions about the occupation and the notion of freedom being both threatened and out-of-reach. The animation tempers the feeling that this film is a UNRWA promotion, but rather a critique of these kinds of initiatives within a broader, more complex backdrop of war and occupation.

A year after the big record-breaking win at the Summer Games, Nitin and his film crew return to Gaza and follow up with Musa, a boy whose face reveals a year of fear, tenderness, and sorrow. Musa admits that his life has changed dramatically since the filmmakers were last there, shifting from a life of total play to a life of responsibilities. This would sound like any 14-year-old’s coming of age story, except that Musa’s eyes seem shifty and troubled when trying to articulate what he’d experienced in a one-on-one interview with the camera. About the attacks in April, Musa says simply that “difficult things happened. The world isn’t all easy. We are confronted with sad things, we deal with them. Missiles fell, I hid under the trees, then it was over.” There’s no talk of kites this time, no UN Summer Games, just fresh memories of shrapnel and bullets.

Musa’s grandfather insists that this last attack was worse than last time. Under constant threat, this is the new “new normal.” The film ends with Musa talking straight into the camera, like he was talking directly to me and you and anyone who will listen. His final message was loud and clear – he wants out of Gaza. He says with a wistful twinkle in his eye:

I would like to travel experience others travels. Document them in books. Talk to people, learn their habits. Visit the pyramids. See the outside world. I would like to get out and see the world.

Flying Paper is a heartbreaking film that flies like a kite in its own right, drifting between politics, art, narrative, and activism. I love knowing that this film creates space for children to direct the telling of a story that pulls us to the edge of a contested space, and asks us to witness all that is beautiful and terrible there.

To support the project, go to Fractured Atlas.

Next post: Elaine’s and the New York I barely knew

Previous post: To save the humanities, try a little tenderness