To save the humanities, try a little tenderness 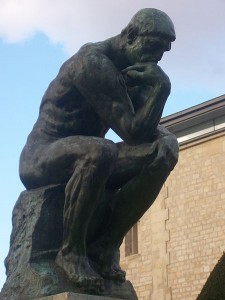 Did you know that only 8 percent of undergraduates major in a humanities discipline like English or philosophy? Or how about the fact that more than half of college professors today are adjunct, or so-called “contingency” faculty? Or what about the hard, cold reality that people who study English or philosophy enter their working lives earning about $31,000 per year while their counterparts over in the economics department will make 26 percent more their first year after college?

All of these and other scary facts can be found in an essay published in the New York Times Sunday Review last weekend. Its author, a philosophy professor at Notre Dame named Gary Gutting, lays out what is often perceived as the “crisis” in the humanities today: low wages, unsure employment, a culture at large that doesn’t really give a damn that you read Euripides in the original Greek or can offer up some scintillating theoretical analysis about anything from elevators to fusion cuisines to post-structuralist notions of “form” on cue.

Nothing new there, or in any of the facts listed at the top of this post. We’ve known all this for years. Every few months someone publishes an article somewhere lamenting the state of employment in higher education, the dearth of interest in the arts among young people today, and the paltry earning potential of someone who decided to spend his four years of college asking questions for which there are no answers and looking at art that was made  thousands of years ago and exists far away in museums or caves or catacombs that he’s unlikely to ever visit.

That’s not the “real” crisis, Gutting argues. Rather, he believes the biggest threat to the humanities is a lack of support for what he calls the “cultural middle class” — those everyday foot soldiers in higher education, writers, artists, and musicians who may not be rich and famous, but are nevertheless as talented and dedicated as anyone who is. This would describe a vast number of people, now more than ever. If you don’t believe me, go work at a restaurant for a few months.

He suggests that we should treat the humanities like we do sports — i.e., socialistically. He cites the example of the Minnesota State Legislature’s recent appropriation of $500 million for the construction of a new football stadium for the Vikings; meanwhile, the Minnesota Orchestra is facing “financial disaster” because it can’t erase a $6 million deficit. If only our government would underwrite the humanities…

Judging from the 700-plus comments the essay has elicited on the Times‘ website in the four days since it was published, there’s no shortage of energy in talking about the humanities. The little feuds that erupted between commenters prove that Gutting struck a cultural nerve, and are as maddening to read as any comment war you’d find anywhere, a cacophony of voices all shouting, rarely listening.

Why do we  spend so much time writing, reading, and arguing about the “crisis” of neglect in the humanities, while the humanities themselves sit idly by, waiting for everyone to stop shouting and just pay them a little bit of attention? If only we devoted a bit of that energy to, say, reading a book instead.

And that’s my proposal: Read a book. Or better yet, read lots of them. Insist on it. Choosing to study English or philosophy takes courage in today’s economic climate, but if more people did it, we might start seeing the “crisis” abate. If employers simply met more English majors, they might start to see that English majors can do far more than talk about Chaucer. They can also analyze complex material and communicate what it means to other people. If employers met more philosophy majors, they might realize that they’re not all chain-smoking wannabe Left Bank intellectuals, but extraordinarily adaptive thinkers who can reason their way through anything you might throw at them.

To anyone entering college today, I’d offer this piece of advice: Never mind that $31,000 per year starting salary, because it’s a meaningless number that says nothing about how it was calculated or even what sorts of jobs the former humanities students are working to make that amount, and just study what you want. Consider it an act of quiet rebellion, a transgression of the mainstream and our collective cultural “wisdom.” Read books, see films, and look at slides of cave paintings and sarcophagi. You’ll have your whole life to figure out what to do with all that knowledge, and no matter how much you earn, you’ll be richer for it. And if you’re worried about getting a job, consider this: if there are enough of you, employers will have no choice but to pay you some attention.

Previous post: If you have a story to tell, just tell it