If you have a story to tell, just tell it 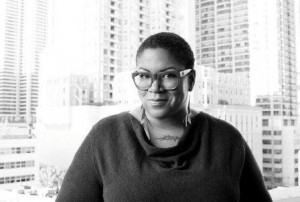 A confession: I rarely write if I’m not getting paid for it.

So I was humbled earlier this week to attend a reading by a woman I’d never heard of before, but who has built a following that any writer would covet. In the basement of a small independent bookstore in Brooklyn, at least 100 people squeezed themselves into folding chairs, onto stairs, and against walls to hear what she had to say. If the room could have fit 200, then 200 people would have been there. And the writer wasn’t getting a dime. In fact, she’s never gotten a dime for anything she’s ever written.

Samantha Irby started her blog, bitches gotta eat, in 2009 using the free publishing platform Blogspot. She writes about herself: an overweight black woman from Chicago with Crohn’s disease, who spent her childhood as an alienated, nerdy little girl who was embarrassed by her disabled mother, tiny apartment, and unfashionable clothes. But she does so with such honesty, wit, and style that even her saddest stories will keep you riveted and laughing throughout. The tag line of her blog is “tacos. hot dudes. diarrhea. jams.”

And she writes only when she wants to, usually on her lunch break at the animal hospital she manages because she doesn’t have an Internet connection at home. Every time a new post goes live, it ricochets around the blogosphere like a highly charged ion. A typical post by Irby will be read by 30-, 40-, 60,000 people.

As she read from her latest (and first) published collection of essays, Meaty, I took in the room. Who were these people hanging on her every word, eyes fixed on the bespectacled woman in the front, who at 33 was in New York for the first time in her life. How could a writer I’d never heard of before that afternoon be such a celebrity to so many other people?

It’s no mystery that markets have been divided up into niches so small and so numerous that we’ll never be able to keep track of them all, nor will we ever return to an age when “famous” people are famous to everyone. There are simply too many niches, too many audiences, too many venues, too many forums. Walk outside, and you’re bound to cross paths with someone who would make someone else swoon — never mind that to you, he’s just the guy  in front of you in line at the grocery store.

But back to money: No wonder Irby hasn’t gotten paid. She’s built a fan base not by arduously clawing her way up the rock face of agents, publishers, publicists, and press junkets to get her work published, reviewed, sold, and read. She just registered a Blogspot and started writing, and people found her. And her fans expect to get it for free. It’s a Blogspot.

Perhaps this will change now that she’s published an actual book, but probably not. Readers have been habituated to expect something for nothing. It’s even possible that Irby found her audience by virtue of giving it away for free. Looking for a good read? Don’t buy the latest David Sedaris, just check out bitches gotta eat-dot-blogspot-dot-com.

Still, I was inspired by Irby’s example. She’s a real writer, someone who not only has  stories to tell, but also a knack for telling them. That’s a rare enough combination as it is; add a willingness — nay, a compulsion — to write whether she’s getting paid or not, and it’s almost unheard of. I suspect her fans, ever-hungry for the next post, would be bereft if she suddenly stopped. Or maybe they’d just find someone else to read.

During the Q&A portion of the reading, several women in the audience — it was almost all women — implored Irby to move to New York. She smiled, visibly flattered by the heartfelt request, and replied, “I need a job.”

No one had a response for that.

Next post: To save the humanities, try a little tenderness