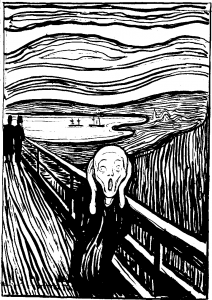 I’ll cut to the chase: I’m looking for a job. Specifically, a writing job, or at the very least, one that involves words in one way or another. This could include editing, ghostwriting, or even social media. It’s a depressing process, and I’ll explain why in a moment.

But before I do, let me just clarify that I’m not unemployed. I have several other jobs already — I teach part-time at two colleges in New York, write essays and test questions for the ACT college entrance exam, and contribute to a few different magazines as a freelance journalist. But aside from the teaching gigs, there isn’t much by way of a steady paycheck, let alone high earnings. Hence my daily perusal of the editorial job postings on Mediabistro, Craigslist, and LinkedIn.

Now, to those listings. I’ve noticed a few things, none of them encouraging.

First, they are highly, highly specific, and they require experience doing that highly specific thing already. For example, if you want a job writing short blog posts about raising kids in the big city, then you need to prove that you’ve already been writing about raising kids in the big city for a reputable publication. In other words, you have to already have the job that you’re applying for. This just makes my brain hurt.

And then there are the experience requirements: Most jobs demand 1 or 2 years’ experience covering a specific field, and rarely do they ask for more than that. Apparently everyone looking for writing work is 25 years old and already extremely focused on one subject. Or at least that’s what employers seem to believe.

Finally, the jobs themselves often look terrifically shallow, focused almost entirely on “raising visibility” and “increasing traffic,” and hardly at all on creating compelling, well-written content. Clicks are God, and you have to show that you’re actively involved with every major social media platform there is: Pinterest, Instagram, Facebook, Twitter, LinkedIn, Tumblr, Google Circles…

In other words, it seems that to get a job these days, you have to be excitable, easily bored and yet myopically focused, and more interested in feeding voraciously from the trough of information than sitting down to a meal and chewing your food.

Look, I get it. Not every publication can or should be Harper’s or The Atlantic. But surely there’s a middle ground, a place for people who entered the business before Facebook and Twitter barged in and rewrote the writer’s survival guide to be less about sentence structure and pitch letters than getting “likes” and mastering SEO methods.

Or maybe there isn’t. In one recent listing, the ad stated that whomever got hired would “write articles, charticles, and listicles.”

I’d have applied, but I was worried that I’d be asked to take a testicle.

Next post: You don’t need to study the arts. Or do you?