Order and disorder, tangible history, and the real value of bookshelves 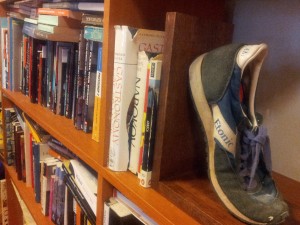 This week a package arrived in the mail: a set of bookends made from a pair of 31-year-old Etonic running shoes. They were my father’s first pair, purchased in 1982 for $32. He put nearly 500 miles on them, thus beginning a decade-long love affair with running that gave him something he didn’t get anywhere else.

During those years, he ran as a kind of therapy: to work through the stress and frustration he felt at work, and for a chance to feel that his labors counted for something real. Running was for him, and him alone, and as a child I didn’t understand it at all. His intensity for the sport was mysterious, even frightening.

But it seeped into me nonetheless, and years later, I became a runner myself, eventually surpassing my father both in race times and distances.

So when these bookends arrived Monday afternoon, I just sat and stared at them for several minutes. They seem ancient compared to today’s running shoes, they’re well-worn, and they look like they were just used in a race. The laces are original, and the suede around the toes and heels are faded from sun and rain and snow that melted 30 years ago, but they still bear the imprint of my father’s feet. And the position they hold, the hypotenuse of a right triangle, toe flush against one side and heel high against the other, make them seem frozen in time, perpetually in the moment of liftoff after striking. I don’t think my father intended this when he made them, but to me, they look alive.

And because they are bookends, I placed them on one of my bookshelves. They serve a purpose there, but not the one they were ostensibly designed for. I have other bookends, other means of keeping my books from toppling over. These bookends, though, are special: they remind me why I have bookshelves, and books, in the first place.

In his timeless, beautiful essay on the value of collecting things, “Unpacking my Library,” Walter Benjamin writes that the existence of a collector is tied, in part, to a “relationship to objects that does not emphasize their functional, utilitarian value–that is, their usefulness–but studies and loves them as the scene, the stage, of their fate.”

He continues: “The most profound enchantment for the collector is the locking of individual items within a magic circle in which they are fixed as the final thrill, the thrill of acquisition, passes over them. Everything remembered and thought, everything conscious, becomes the pedestal, the frame, the lock of his property. The period, the region, the craftsmanship, the former ownership–for a true collector the whole background of an item adds up to a magic encyclopedia whose quintessence is the fate of his object.”

So now, amid hundreds of paperbacks, hardcovers, magazines, and even some years-old issues of the New York Times, sit my dad’s old running shoes, at once holding the books in place and forever in motion. As their heels push against the books, their toes barely touch the ground, ready to launch their owner–my father–back into another stride. And in this place where they now live, they draw my attention away from their original function as running shoes, or their current function as bookends, and allow me to think of them as something far richer and more meaningful: as relics of an era when my father was the age I am now, of his passion that eventually became mine.

In the endless, labored, and often tiresome debate over digital versus analog, e-readers versus paper, and “authentic experience” versus virtual, suffice it to say that no digital bookshelf will ever hold as much value as mine, poised as it is between order and disorder and kept from toppling over by a pair of old shoes.