This Is Why We Do This Thing 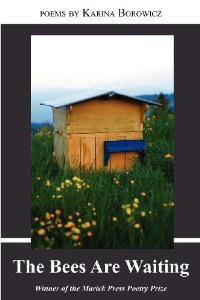 Karina Borowicz sends word that her first collection of poetry, The Bees Are Waiting, which already had been selected by Franz Wright for the Marick Press Poetry Prize, has just been named a Must-Read Book of 2013 by the Massachusetts Center for the Book.

Karina’s debut publication, the Maintenance of Public Order, appeared in Contrary in 2005.

I can’t overstress the huge role that Contrary played in bringing this work to light.  Back when I lived in Moscow, the Russian postal system was so poor that the idea of subscribing or submitting to journals was unthinkable.  The online format of Contrary provided me with a way to access quality English-language writing, as well as a way to submit my own work for consideration.  When I finally did submit, your support and encouragement did much to convince me to return to the U.S. and pursue writing more seriously. The Bees Are Waiting is the result, and I’d be thrilled to think that you’d added the collection to your own poetry libraries, and that you took some satisfaction in knowing that Contrary played such an important role in bringing it to light.

And that’s why we published online back when everyone still thought paper was great. It’s why we pay our writers while our editors donate labor and cover costs. That’s why we do these Contrary things.

More of Karina’s work in our pages:

You can order a copy of The Bees Are Waiting from this link, and Amazon will donate a portion of the sale to the Contrary Writers Fund.

Next post: If you’re not getting paid, should you still publish?

Previous post: “I’ve written a book,” you say. “Now how do I get published?”