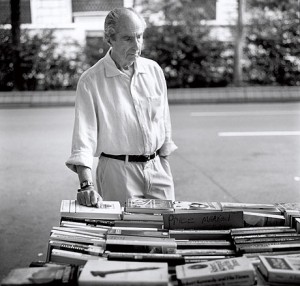 If you, like many other people — including some seasoned reporters at the New York Times — were relieved to learn that you could keep reading new content from Philip Roth following the 79-year-old author’s retirement from novel writing through Twitter, I have some bad news. The real Philip Roth — yes, him — has NO Twitter account, and it is MOST unlikely he ever shall.

That last sentence was taken directly from Blake Bailey, Mr. Roth’s official biographer, in response to the explosive interest in the Twitter feed of one @PhilipRothOffic, an apparently fake account set up on Monday this week by an anonymous party posing as Mr. Roth. “I join Twitter today,” read the fake Roth’s first tweet. “It’s easy…”

It’s not the only “Philip Roth” Twitter account, however. If you go to @PhilipRoth, you’ll find all kinds of unlikely sentiments, from an admission to playing tons of Xbox to a glowing endorsement of The Girl With the Dragon Tattoo. But that account is clearly labeled as satirical. This latest impostor seemed determined to dupe everyone, except Roth himself.

In retrospect, it seems laughably obvious that Philip Roth would not be on Twitter. One does not imagine Roth in front of a computer or glued to his iPhone, but reading a book (on paper) beside a single lamp in an otherwise dark and silent house. Perhaps I’m projecting a bit here, but I like to think of Roth as immune to the digital deluge of the Information Age, a vestige of another time, a man who still takes things seriously.

Whether all that is true or not, we now know — at the very least — that Philip Roth has not replaced literature with 140-character tweets. And that’s a relief.

Previous post: Can we love fiction once we’re no longer seeking answers?