Can we love fiction once we’re no longer seeking answers? 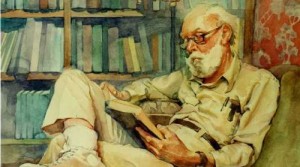 I once asked my father, who had majored in English, gotten his master’s degree in English, and for years had dreams of being a full professor of English before he decided (wisely) to pursue a more stable career instead, why he no longer read novels. I was in college at the time, and just discovering the wonders of serious literature through the books of D.H. Lawrence, Don DeLillo, Henry James, Thomas Pynchon, E.M. Forester, Salman Rushdie, and a lot of other writers who had nothing more in common than their shared dedication to exploring human experience through fiction. In other words, I was high on books, all kinds of books, and it bothered me that my father — whose love of literature I had apparently inherited — had given them up. “I guess I lost the passion,” he told me.

At the time, I thought that was a sad indictment of age and the workaday life of a family man. He was only 50 or 51, which seemed old to me then (now it seems anything but), and had devoted his 30s and 40s to building a comfortable nest for his family. I appreciated that, of course, but I also thought it was a damn shame that in building this life, he’d stopped caring about something to which he’d once devoted so much time and energy, and a field he’d once been so determined to enter at the highest level — that of a college professor.

I’m older now, and I realize that it was probably much harder for him to utter those words — I guess I lost the passion — than it was for me to hear them. After all, he was the one who had to face facts: life changes, and the passions of our youth do not always stay with us throughout those changes.

That’s a bitter pill, and it gets more bitter as you age. The kind of deep, stomach-deep curiosity — about life, relationships, oneself — that motivates a young person to read novel after novel can easily be lost to far more prosaic concerns. I’d list some, but they’re different for everyone, and I’m sure you get my point.

In the past few weeks, I have read two essays on literature and writing: one about metaphors, and the other about religion in fiction. Both were excellent essays, not only well written, but rich with insight. And in reading them, I realized that I have inherited more than my father’s love of literature; I’ve inherited his loss of passion for it too. I felt like I was reading about something once-familiar that had become strange, like a town I’d lived in long ago, but had not visited in years.

This isn’t to say I don’t still feel moved by what I read. I still find myself totally absorbed in pieces of journalism — long-form articles in magazines like The Atlantic, The New Yorker, and Harper’s, especially — as well as non-fiction books. But I’d like to find a great novel again, too, one I’ve never read before. I’d like to find myself in that old state of curiosity that I, like my father, now associate with another time. And yet, I have to wonder: is it even possible to regain the passions of youth?