Romney, from a teacher’s perspective 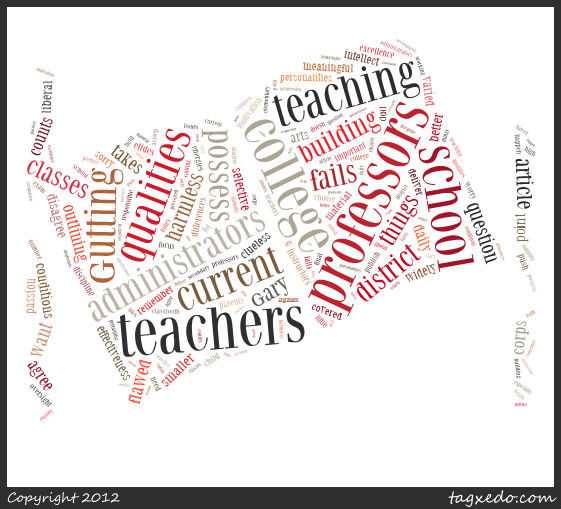 Here is an example of something I do in my classroom, room 209, when conflict arises, which it inevitably does when almost thirty teenagers remain in a room with four walls, one of which is less than functional as a wall, for ninety minute periods. This is the scenario: A student thinks that she should receive credit for an assignment even though she has done nothing during class but play games on her computer. “But I promise you, I turned it in.” “Well,” I say, “from my end, I can tell you that your assignment is not on Blackboard (the school’s online portal), and your behavior during class has conveyed the message that you either do not know how to complete the work or do not care to do so.” I continue, “I can’t give you a grade for something that I can’t see.”

Likewise, I would like to say the following to some politicians and policymakers—Bill Gates, Arne Duncan, Michael Bloomberg, and Mitt Romney, among others: As a new teacher in an urban school district, I am confused by some of your education initiatives. From my perspective, when you send your children to expensive private schools while opining about the uselessness of small class sizes and technological resources, it seems to me that we have a contradiction at hand. You may not agree with my perspective on education, but if you take your cue from Scout Finch and walk just a few yards in my shoes, you’ll see that I see a very high-stakes contradiction.

Mitt Romney claims that smaller class sizes do nothing for student achievement. Michael Bloomberg would, if he could, fire half of New York City’s teachers, double the class sizes of the teachers that are rated most effective, and pay those teachers twice as much. While I am paid well, relatively speaking, in my profession—my district pays its first-year teachers with master’s degrees more than any other district in Virginia—a pay raise would certainly be nice, given the sometimes tough conditions, high expectations, and twelve-or-so hour days. But with twice as many kids in my classroom?

As an experiment, let’s imagine this scenario with my largest class. Would I like to teach 58 teenagers for ninety minutes? Would they like it? Would their parents like it? Would I be able to give consistent feedback to almost 240 students? Would I quit? This is sheer foolishness: give the best teachers—who for the most part work more than their less effective counterparts, and much more than the 7.25 hours a day they are paid—tough conditions at best and chaos at worst, and how many of them do you think will stick around?

Can we ditch those far-fetched ideas and replace them with dreams, dreams that all children will have small classes, resources to succeed in our globalized world, adults who cultivate intellectual curiosity, and teachers who know them well and care about them more? Can we exchange the outdated, never-stated premise that the children of the already wealthy and well-educated merit a different kind of education than that of everyone else’s children for a philosophy that aims to serve everyone’s children equally well?

We can do that by dismantling the unspoken barriers and pressures that deter people from a life in the classroom. Were the prospect of teaching more palatable to those outside the school walls, more talented and innovative people would join the profession and stay there—in the classroom—not “in education,” code for a distant, cautious kind of caring; not “in education policy,” code for, “I think I am too smart to teach”; or “education reformer,” code for “I think I can change system from outside the system.” To those invested in education, I challenge you to consider that because the most significant place of improvement is in the classroom itself, and that while the job of a classroom teacher exudes no glamor, that is the place where you are truly needed and the place where you will make the most difference in the lives of young people.

The invitation is yours: room 209 is unlocked.

Previous post: The writing life, or, reckoning with poverty