The writing life, or, reckoning with poverty 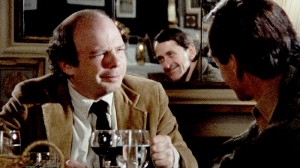 There is a moment in Louis Malle’s excellent 1981 film My Dinner With Andre that has stuck with me since I first saw the movie almost 20 years ago. Wallace Shawn, playing himself, is on his way to meet Andre Gregory for dinner at a fancy restaurant in Midtown Manhattan. He takes the subway, a graffiti-riddled relic of New York’s violent past. The carriage is significant: it reflects Shawn’s meager means, his relative poverty, a stark contrast to his friend’s prosperity. In voiceover, he narrates that when he was young, he was obsessed with art and music. “Now,” he continues, “I’m 36 and all I think about is money.”

More than 30 years later, I’ve caught up to Shawn. I’m now 36, and like Shawn, as a child I rarely thought about how I’d make a living one day. Throughout college and into my 20s, I continued to follow my bliss, as the saying goes, and pursued a writing life. I interned, took fact-checking jobs, and jumped for joy when I got my first feature assignment from a national magazine. I was just successful enough to keep at it, each new assignment offering sufficient proof that I hadn’t made the wrong career choice.

But being good doesn’t always mean getting paid, I’ve learned. Or at least not very much. This never deterred me as a student, as a 20-something, or even as an early 30-something. I did what I knew how to do, and I took pride in it. I believed — firmly, naively — that if I did what I loved and did it well, then money would follow. That’s what parents, teachers, and mentors always said would happen.

Still, money has proved elusive. For years, I wondered if I was doing something wrong, if I simply wasn’t pitching enough or to the right magazines. Talking to my most prolific writer friends has taught me that it’s not me at all. Writing, quite frankly, doesn’t pay.

And that’s fine, when you’re young. But after a while, as Wallace Shawn realized when he was 36, poverty — even noble, quasi-chosen poverty — becomes a drag. You begin wanting things. You crave security. The very things you loved when you were young — art, music, ideas — become irritating reminders of your own naivete. If destitution threatens the body, the life of the mind becomes irrelevant.

I can still remember the impression Shawn’s words had on me at 18, just beginning my college career, planning tutorials on Kafka, D.H. Lawrence, the relationship between psychology and religion. His cynicism scared me, but not enough to change my mind about how to spend the next four years — to say nothing of the following 15. Conviction is powerful medicine.

Now I’m 36, and all I think about is money. I find myself envying investment bankers, real-estate brokers, and even marketing executives. They live comfortably, are able to provide for their children, and take exotic vacations. They’re my neighbors in the once-middle class Brooklyn neighborhood I won’t be able to afford much longer. As a recent story in the New York Times put it, in the mid-1960s,  “the people moving [to Park Slope] were not rich. They were teachers and nurses, artists and writers, architects and engineers … a far cry from the résumés circulating on Park Slope playgrounds today.”

This is the neighborhood that Wayne Wang and Paul Auster chose for their 1995 movie Smoke, a time-capsule of a film about everyday people leading everyday lives in central Brooklyn. Today, it’s a suburb for the wealthy. For people who didn’t study Kafka or religion, but marketing and applied math.

I often wish it were 1981, when a brownstone could be had for $50,000. But then I think of Mr. Shawn on the subway, and I realize that even in 1981, worry and struggle were simply part of the writing life. And in a strange sort of way, I take comfort in that.