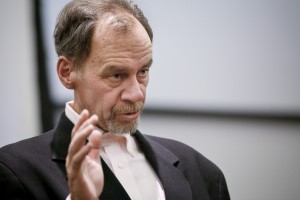 Leave it to David Carr to let us know what’s what.

Yesterday’s New York Times featured a classic Carr piece (no pun intended, honestly) about Atavist, a new Web-publishing platform that allows publishers to “seamlessly weave together their text, video, audio, photos, maps, interactive graphics, and timelines” in a multimedia “environment.” Atavist also produces its own content — all with a staff of just eight full-time employees working out of Brooklyn.

Frequent readers of this blog know that I’d resolved to leave the debate over e-books vs. “real” books — it’s gotten tedious. But this is interesting stuff, and not just because of Atavist’s unique approach to publishing in the virtual age. It’s interesting because Atavist’s founders include some heavy hitters from the traditional world of journalism, who value long-form content over 300-word blog posts that merely aggregate, summarize, and comment on other articles (kind of like this one).

Evan Ratliff, Atavist’s chief executive, is a longtime contributor to Wired; Nicholas Thompson is the editor of NewYorker.com; and Jefferson Rabb, the company’s chief technology officer, designs Web sites for books. And they’re all friends, equally devoted to the cause of keeping journalism — real journalism — alive and well, despite the rising death toll of newspapers and magazines around the world.

And that’s not all. They’ve secured about $1 million in backing from Internet Big Boys like Eric Schmitt of Google and the Netscape founder Marc Andreesen. Granted, a million bucks in seed money is nothing — when I was a business reporter during the dot-com boom, we wouldn’t even look at a new venture if it hadn’t raised at least $10 million — but it’s a start. And it got David Carr’s attention.

For Atavist, that might prove to be its biggest boon. Carr is a skeptic, a brilliant analyst, and something of an oracle in the world of news media. His insights can have profound consequences, if only because they’re his. In other words, David Carr’s optimistic — indeed, endorsing — article about Atavist could be worth far more than a million dollars.

Previous post: Everyone I know loved Wild Things the best