What the Quaker Oats Man Knows 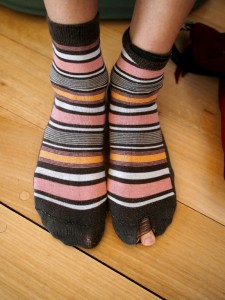 The Religious Society of Friends (RSOF), aka “Quakers,” was founded in England in 1652. Though there are still about 300,000 Quakers in the world today, when I mention the religion in polite company I often get puzzled looks, “Quakers? Aren’t they mythical, like fairies?” and “How do they get by without using electricity or driving cars?”

Clearly, there is need for a little education here.

I believe this confusion can be blamed on the Quaker Oats Man. We’ve all seen him on those boxes of oatmeal, wearing his old-fashioned clothing and that red-cheeked superior smirk. He gives Quakers a bad name, I tell you.

The Religious Society of Friends, also known simply as “Friends,” is not church as we know it. Though the religion has been around since the 17th century, it is still as unconventional today as it was seen to be then. Their services are called “meetings,” and their building is referred to as the “meeting house.” There is no clergy, in fact, nobody is in charge. They hold no creeds, no dogma; they tell no myths, have no rituals, no symbolism. Zilch. I had always thought of Quakerism as the Seinfeld of religion. It is a religion about nothing.

But Friends do hold principles. They believe in simplicity. Not in the “no cars, no electricity” way but rather, in more of a “green, socially responsible, and try not to wear a lot of designer labels” manner.

Quakers are perhaps best known for their staunch commitment to peace. In fact, the RSOF won the 1947 Nobel Peace Prize. They have always refused military service and, during times of war, are often granted conscientious objector status, though many have been jailed for their pacifism throughout the years. Some Quakers go so far as to be unwilling to allow their taxes to go toward military spending and they establish separate measures with the government for the allocation of this portion of their taxes.

Their own literature explains more of who they are and the RSOF do like their literature. Many meeting houses boast their own library and all carry plenty of pamphlets, leaflets, and publications that explore common interests such as climate change, the progress of volunteer peace workers around the world, political and social issues, and always, always, Quaker poetry.

It is a world-wide religion, practiced in nearly every country, though their numbers are dwindling. Again, I blame the Quaker Oats man. But they too are somewhat responsible for their own diminishing membership. They don’t advertise, baptize, chastise, nor proselytize. It hardly seems like a religion at all. It is easy to understand why so few would venture into a meeting house uninvited.

Though they have a reputation for being puritanical, which really isn’t fair given how poorly the Puritans treated them back in the day, they are actually a very liberal group. They stress moderation in all things but they drink, they dance, and they can sin with the best of us. They do, however, frown on gambling and other than staunch pacifism, this is the only line in the sand that Quakers have drawn as far as I can see.

They refuse to swear legal oaths, with the explanation that they recognize only one standard of truth. A Friend never lies.

The RSOF developed as a nonconformist movement in reaction to materialism. George Fox, one of the early founders of the religion, urged his followers to follow a more simple path of Christianity, one that they felt was based on early Christian communities. And, like the early Christians, the first Quakers were also beaten, imprisoned, and sometimes killed.

In fact, the term “Quaker” was initially used derisively. During a trial an early Friend faced his accusers and “bid them tremble at the word of God,” and then those nasty Puritans turned it all around and gave them the cruel epithet “Quakers.” But Friends simply appropriated the name, thus stripping it of its insult in a very Friend sort of way.

Quakers were radical in their time, and still are to some extent, in that they believe that each person can experience a direct relationship with God. This is why they have no clergy or anything else that might possibly be construed as an intermediary. They do not give authority to the Bible but use it instead for guidance and inspiration.

To investigate British Quakers I decided to visit the Seven Oaks Meeting House. It was once a large thriving meeting but now is down to the last determined dozen or so members. I arrived to a warm, if not somewhat surprised, welcome. The meeting room itself was nice enough and the doors of the room opened onto a beautiful garden.

They explained to me that I could sit anywhere and that the chairs in a Quaker service are usually arranged in a circle, underlining their commitment to egalitarianism.

There seemed to be an awful lot of women in attendance, which single men should take note of.

Before we began, they asked me, very nicely I might add, not to take notes during the meeting. I was a bit taken aback. No notes? They thought it might disturb the silence. I huffed and puffed a bit. My mind is like a sieve so I rely on my notes.

But as it was, not that much happened. They refer to the meetings as “a space of gathered stillness.” Actually, they sit in collective silence – for an hour.

As a child, a Quaker friend of mine, a Friend friend if you will, attended meetings with his grandmother. He said that each time they entered the meeting room she would direct him to “Go in and greet the light.” The “light” is a metaphor to Quakers for one’s relationship with God.

So I sat in silence and looked for the light. For an hour.

There are many forms of silence. There is the popular “silent treatment,” prized by angry couples worldwide, the spiritual “vow of silence,” the evocative “moment of silence,” Simon and Garfunklel’s famous “Sound of Silence,” a parent’s desperate plea for “a little bit of silence, please!” and the cruel silence of censorship. My mind was wandering.

I looked around the room and noticed that everyone, save the man with special orthopedic shoes, was wearing sandals. That says something about a religion, I thought. I was not sure what, exactly. And I was the only one with a pedicure. Though I couldn’t vouch for the woman wearing striped socks under her sandals, I’d be willing to bet that she didn’t have painted toenails.

I wished that I could take out my notebook. I didn’t think that pencil against paper would really be that disruptive. What about the woman next to me with the dodgy stomach? That wasn’t distracting? It positively screamed. And the woman who kept flipping maniacally through the pages of the Bible. What was she looking for?

I closed my eyes and tried to enter the silence, or the light, or whatever. My mind followed the sounds of a dog barking down the street, birds singing, distant traffic sounds, there goes that stomach again. What could she have eaten? And then the neighbor next door began to play the piano. Loudly, with the windows open. What Kind of Fool am I. Anthony Newly. I recognized it right away, having appeared in the play in high school. I could still remember the words as it turned out.

I started to relax. To sit in silence for an hour is actually not as boring as one might think. Parents would probably find a Quaker meeting heaven.

The silence of a meeting can be broken should someone be “moved by the spirit” to speak. Early Quakers were considered radical in that women had the same right to speak during meetings as men, something that might still be considered alarming in many churches.

During the Seven Oaks meeting, a few people were moved to speak. One mentioned the recent death of a friend, and she asked us to “hold his family in the light.” Another spoke of her response to a work of art that she had recently seen, and the third read a very moving passage from a an essay written by that most famous of American Quakers, William Penn. It was something beautifully profound about how Quakers view death. But I can’t quote it here because I was not allowed to take notes.

It did take a lot of work to sit in silence for an hour. You couldn’t just nod off. Though I have heard that people do fall asleep. And sometimes, yes, they snore. The rule of thumb is to simply ignore them, unless they are accompanied by a spouse, who usually takes care of the problem in their own private way.

The end of the hour was signified by the assigned leader (not a priest) taking her neighbor’s hand. And then everyone joined hands for a silent moment of camaraderie.

I wondered how Quakers worked as a group without a priest? Who makes the decisions? It turns out that everything is run by committee. If you have ever been on a committee or needed anything from a committee, you can appreciate just how alarmed I was. And it got worse.

Business is conducted with silence. An appointed clerk records the “sense of the meeting.” Can you imagine? They don’t vote. They simply have quiet time and get a sense of what is right. So there is no debate, no arguments, no threats. Do these people really understand the meaning of the word “meeting?”

When asked if they agree with a point, the positive Friend response is “I hope so” as opposed to a simple “yes,” and this is shorthand for “I hope that this is God’s will.”

A decision is made when everyone in the meeting hopes that a “way forward” or “coming to unity” has occurred. If someone at the meeting disagrees the issue will not be considered resolved and they will return to silence. They maintain that every decision is determined by God’s will and, if everyone is listening to God, then the correct decision will eventually become evident.

I questioned whether those who thought that Quakers belonged to another time weren’t right after all. This seemed no way to run a religion. Where did they find the time to do all of their charity service? What does the Quaker Oats man know that we don’t?

The American artist James Turrell is a Friend friend. He once told me about being at an exhibition where an Italian gallerist approached him and coolly asked, “So, eez eet true that zou are a Quacker?” He never did correct him.

Some other famous folk who you probably wouldn’t have guessed were Friends include singer Bonnie Raitt, Dame Judi Dench, Sir Ben Kingsley, author A.S. Byatt, singer Dave Matthews, model Cheryl Tiegs, and, much to the shame of Quakers everywhere, former American President Richard M. Nixon, who really was much more of a Quacker.