Your thoughts on Adrienne Rich, please 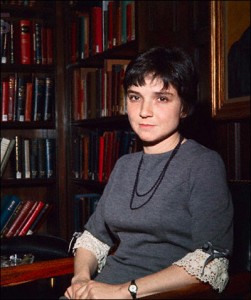 I first learned about Adrienne Rich, who died on Tuesday at her home in Santa Cruz, CA, at the age of 82, in college almost 20 years ago. I was 18, and many of my professors adored Rich. They taught entire courses about her, or at least included her poems on their syllabi, and by sophomore year, I understood that in the pantheon of Important Writers to Know About, Rich ranked pretty high.

And yet, I never read her — or at least not that I can remember. Why not?

In her memoir, But Enough About Me, What do You Think of My Memoir?, Nancy K. Miller describes reading as an autobiographical act. Everything we read says something about who we are, and we define ourselves through the process of reading. She’d say that there’s a simple reason that I loved Philip Roth, Milan Kundera, D.H. Lawrence, Vladimir Nabokov, and Tim O’Brien: I found myself in their words. They still define me today, along with everything I’ve read since college.

Adrienne Rich never appealed to my sense of self as an undergraduate, and it wasn’t because she was a lesbian, a feminist, or a Jew. I read other feminist authors, and liked some of them. I even took women’s studies courses. I simply didn’t care to read her work. But now that she’s gone, I find myself thinking about her again for the first time since the early 1990s, wondering why I never gave her a chance.

Maybe it’s because she was a poet, and the only poet I can remember liking at that age was Gary Snyder. Or maybe it’s because, at that age, we tend to develop our identities around our tastes, and in opposition to that of others. I was a Kundera fan; meanwhile, Patrick liked Adrienne Rich.

It seems so juvenile now, so limiting. But that’s how it is, and frankly, if I didn’t give Rich a try in college, why would I after graduation?

So I’m left with nothing but a vague sense of Adrienne Rich’s significance in American literature, and a few fuzzy memories of college that are associated with her name.

And so, I ask for your thoughts. Help me understand what I was missing.