Voices From Beyond the Grave 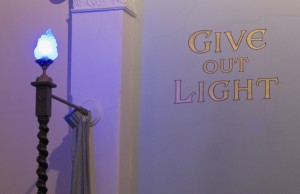 It was with nervous anticipation that I first approached London’s Spiritualist Mission on that cold Wednesday evening. Perhaps I might receive a message from beyond?

The church, built in 1912, was beautiful and warm. Music played softly. I relaxed. It’s not often one hears show-tunes in church.

It was a decent sized crowd for a Wednesday; the congregation an eclectic mix. But the prestigious (in these circles) London Spiritualist Mission is always well attended. In addition to the many curious attendees, they have about 250 members from around the world.

The service itself was Christian in nature. We began like most other churches in Great Britain, with an Anglican hymn from the Book of Common Prayer. One would think that a congregation that plays show-tunes and invites the dead to speak would tackle more contemporary music.

The service was led by Eva, a happy medium, who spoke in a sweet Cockney accent. She began each communication by pointing someone out in the pews. Once called upon, they were to respond, “Bless you,” though no one had sneezed.

The Man in the Green Jacket. “Bless you.”

Eva asked if he had any doubts when he bought a jacket that color. No. “Really?” she asked, her eyes narrowed knowingly. No. “Do you know a David?” No. She turned to the rest of us. “Does anyone here have something that they bought but wish they hadn’t, or know a David?” We all just smiled politely.

On a roll now, Eva turned to another attendee about a spirit named George. “Yes,” he affirmed, after the customary blessing, “George was my father.” He had a thing about shoes, she told him. “Yes, he was a shoemaker.”

She turned to a lady in the front row and predicted. “You’ll be doing karaoke soon.” The poor woman looked mortified.

She told another woman that she had a new toaster coming her way. Eva then digressed into a story about her own new toaster and how, upon the recent discovery of a mouse in her flat, she won’t use the toaster – lest the mouse accidentally fall in.

We listened politely as Eva’s spirits connected with attendees, giving out practical advice about how to live, getting out more, visiting the dentist and other bits of homespun wisdom. “You’re a different lady now to what you was.” Eva told one woman, “And spirit says you should eat more jelly.”

I spoke with Eva privately after the service and she predicted that I would be going to America soon. “Well, I am American,” I said.

We talked about the service, and Eva explained, “It’s not too religious, but when you can communicate with your loved ones it’s great.”

Spiritualists have no fixed creeds, instead adhering to a list of agreed-upon principles. Their main concern is proving the survival of the soul. Each service is unique because the church maintains a rota of mediums and healers, apparently there is a Spiritualist circuit. But there’s no hocus-pocus, there are no trances, no babies being sacrificed – just deceased spirits coming back to speak to the living through a medium.

And for God’s sake, do not call them readings, they are communications. “Readings are for psychics,” sniffed Larry, the church’s secretary.

I returned again the following Sunday, because Spiritualist meetings can be strangely addictive.

This time the medium was Carol, a woman with a quiet singsong voice. She began by describing a spirit-lady of medium height and build, with pale skin and glasses. Then Carol pointed to me!

“Do you know this spirit?” No.

“She knit and gave you sweets. She was a neighbor, on a wide street in America, and had a white fence.” Blank.

Carol was getting impatient. “She had a small dog.” Nope, not ringing any bells. Everybody was now impatient, they all wanted their own turn. But I simply didn’t recognize her. Finally, we both admitted defeat. (Though later, I would remember a kind lady who lived close by and fit this description. I’ve just recently heard that she passed away.

Carol’s next communication also began badly until they finally ascertained that it was a grandfather. Once recognized, his message was simply, “I am behind you every step of the way.” I found that kind of eerie.

Another lady-spirit arrived. She was described as tall, well dressed, and educated. Carol pointed to a man in the crowd but he said he didn’t know her. She persevered. Go back to when you were a boy. A teacher? No. This spirit says that your mother has two sisters. Yes! She says you like jelly. Yes! (what is with the spiritual preoccupation with jelly?) And you used to come to her house by train. His face lit up as he remembered.

“It hasn’t always been easy for you,” the tall, well-dressed, and educated spirit lady said through Carol, “but your mother instilled good values. Don’t get knocked off your trolley.”

After the service, my own spirits lifted when Larry, who is a medium in his own right as well as church secretary, approached me and asked, “Who were the three brothers?”

My father came from a family of three brothers.

Larry began to describe him. “His death was expected yet unexpected. He was his own worst enemy.” This sounded like a match.

Larry said that my father was proud of me for “kicking that Mexican bastard out the door.” Ah, that would refer to Previous Boyfriend. Leave it to Dad to come all the way back from the grave to tell me that.

Then Larry and I had a conversation about my father that was eerily accurate. Yet I found it surprisingly unsatisfying to speak to my father again. He had been gone for so long, there was so much that I needed him to say, but instead he spoke of other things. Not jelly, thank God, but little things. Thing that didn’t matter. Just like in life, I supposed. “The spirits don’t change just because they are dead,” Larry advised.

In regard to the Spiritualists, most ask, “Is it true?” Many try to guess at how the mediums can ascertain personal information, and why adherents adhere.

But in the search for truth, do some things have to be false? And is truth even the best criteria? We don’t put other religions to such tough truth standards. No one puts the communion wafer to test whether it really is transformed into the body of Christ. We all want to know what is going to happen to us after we die. It is a universal obsession and has been since the beginning of time. The fact is that Spiritualism gives comfort and direction to people who follow it. Isn’t that the most that any religion can aspire to?