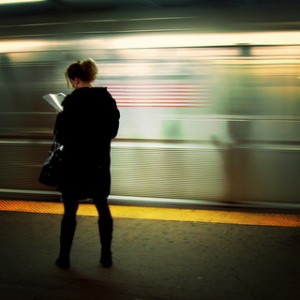 Reading poetry on the subway makes everything feel new and strange. It lifts me up when I’m down underground, it complements the rattle and shake, it rides above the cacophonous chatter, it embraces the dissonant free-jazz squeaks and howls of the train—and it’s wonderfully different every time.

There are practical benefits to poetry on the subway: many collections are small and portable, easy to pull out of your pocket or purse the second you sit down; and even if you stand, they’re easy to hold for long periods of time without straining your wrist or knocking fellow passengers during a sudden stop.

Beyond the practical advantages, poetry is the middle ground between listening to a song and reading a short story or a novel. And in this middle ground your mood pendulum may sway a little or swing wildly — and everything will seem crisply distinct.

But enough general talk. Let’s explore some possibilities! Let’s say you have with you T.S. Eliot’s The Waste Land and other poems. You could read (or re-read) the title poem, but it’s 20 pages long, and you haven’t got the time. You only have a few stops to go. So you find “Hysteria,” a one-page prose poem that starts out with: “As she laughed I was aware of becoming involved in her laughter and being part of it, until her teeth were only accidental stars with a talent for squad-drill.” And if at this point some woman on the subway laughs or smiles, you will see something you’ve never seen before.

So you finish that poem rather quickly, maybe even re-read it two or three times, and then decide to start another one. You have a few minutes, and just as you start to read “The Love Song of J. Alfred Profrock,” you feel the train slowing down—and you find yourself slightly, secretly grateful for a chance to take in a few more lines or stanzas.

Let us go then, you and I,
When the evening is spread out against the sky
Like a patient etherised upon a table;
Let us go, through certain half-deserted streets,
The muttering retreats
Of restless nights in one-night cheap hotels
And sawdust restaurants with oyster-shells:
Streets that follow like a tedious argument
Of insidious intent

And just as you enter a room where “the women come and go/ Talking of Michelangelo,” it is your stop, and you have to go. On your ride back, you pick up where you left off—or you start from the top. Of course, some poets, such as recent U.S. Poet Laureates Charles Simic and Kay Ryan, consistently offer you such short poems that you’re certain to finish any one of them before your next stop. A new Kay Ryan poem called “Spiderweb,” from The Best of It: New and Selected Poems, goes:

From other
angles the
fibers look
fragile, but
not from the
spider’s, always
hauling coarse
ropes, hitching
lines to the
best posts
possible. It’s
heavy work
everyplace,
fighting sag,
winching up
give. It
isn’t ever
delicate
to live.

That’s the entire poem. And you almost immediately want to read it again. In fact, read it three times! It will feel different every time.

You’re simultaneously inside the subway car and inside the poem. In That Little Something, Charles Simic has a poem called “The Ice Cubes Are On Fire,” and the first of its three stanzas goes like this:

In a kitchen with blinds drawn,
The woman bent over a sink,
Rubbing ice cubes over her face,
Stops to peek through a slit.

You’re there, you’re with her, and you will see what she sees.

Sometimes, in a sense, you’ve already seen what the poet sees. I’m talking about poems that take place in New York; and I say “in a sense” because although those poets lived in New York, it was many years ago. “Kaddish,” a long poem Allen Ginsberg wrote in the late 1950s for his deceased mother, starts out like this, sad and wonderful:

Strange now to think of you, gone without corsets & eyes, while
I walk the sunny pavement of Greenwich Village,
downtown Manhattan, clear winter noon, and I’ve been up
all night, talking, talking, reading the Kaddish aloud,
listening to Ray Charles blues shout blind on the
phonograph
the rhythm the rhythm — your memory in my head […]

Yes, and sometimes—say the mood strikes you, or you’re just drunk or tired—you may want to do away with any density or complexity and go for some straight-forward talk from a self-proclaimed “dirty old man”—the one and only, Charles Bukowski. And if you’re sitting next to a child or a nun or a blue-haired grandmother, you may want to bring the book closer to your eyes—or away from theirs. “Scarlet,” from Bukowski’s Love is a Dog from Hell, starts out just so:

Soon Scarlet calls and Bukowski invites her over. And so it goes. But sometimes you may be in the mood for something more lyrical and tender. In that case, Chilean poet Pablo Neruda is your man. Anything from Twenty Love Poems and a Song of Despair will make you weak and warm. And you may even miss your stop. In “White Bee,” Neruda writes:

White bee, you buzz in my soul, drunk with honey,
and your flight winds in slow spirals of smoke. […]

Let your deep eyes close. There the night flutters.
Ah your body, a frightened statue, naked.

You have deep eyes in which the night flails.
Cool arms of flowers and a lap of rose.

And it goes like this, very sweetly, for a few more stanzas.

There are so many poems and poets—such as Whitman, Frank O’Hara, Robert Pinsky, Baudelaire—that I did not mention that are also great (and all so great!) on the subway. In fact, if variety is what you’re after, check out Poems of New York, from Everyman’s Library Pocket Series.

For me, at this point, the association between subways and poetry is irreversible. Just as music has inspired me to write poetry, so have the rhythms and sounds of the train—particularly the A train, which often makes me think of the jazz standard “Take the A Train.”

Sometimes there is just no better place to read poetry than on the subway, the massive circulatory system that lies underneath this great city of ours. So for the sake of your senses, for the multitudes that reside in your mind, do give this wonderful practice a try.

Next post: The book vs. the app — a tired, boring debate

Previous post: Suicide, local. Suicide, global. (And it was already too much).