When academia becomes a novelty act 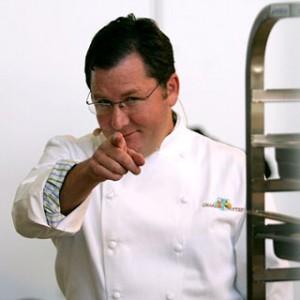 This news is sort of last-week, but it’s been on my mind. Charlie Trotter, the famed Chicago restaurateur who helped ween that city off its diet of hot dogs and milkshakes, introducing farm-fresh vegetables and elegant presentations at his posh restaurant on West Armitage Street, has decided to shut it down this August. His reason, says the 52-year-old chef, is to focus on things he has neglected up to now: travel and… wait for it… academia.

Specifically, he wants to earn his master’s degree in philosophy and political theory. (I suspect he’s at least looking at the University of Chicago’s Master of Arts Program in the Humanities.)

When I first read this news last Monday, I had to read it again to make sure I hadn’t misunderstood something. I hadn’t. He really is going back to school to study philosophy and political theory. And good for him. I’d like to do the same thing.

Which leads to my point: I know a lot of people who’ d love to go back to school an d study film theory, English literature, creative writing, and, yes, philosophy and political theory too. But they can’t. It’s expensive and impractical, and in this economy (!!) who can afford such flights of fancy?

Yet many of us have done just what Charlie Trotter is doing in the past, and many continue to do so even today, despite the grim job prospects for people with advanced degrees in the humanities. So what makes him doing it any differen t?

For starters, Trotter is firmly planted in the culinary 1%, the rare kind of chef who’s actually gotten rich from cooking. He might even be in the overall 1% for all I know. He can afford to quit working and play around in the quads for a while.

He also doesn’t have to worry about building a career out of it. That part of his life is behind him now, at the ripe old age of 52, and he can do whatever the hell he wants. And frankly, I’m beyond impressed that he’d choose to study philosophy and political theory over hunkering down in some gated community on Hilton Head Island, whiling his days away with golf and mint juleps.

But the news also made me consider my own youthful naivete when I went back to school, at age 27, to get a master’s degree in English and cinema studies. Was I driven? Definitely. Did I take my work seriously? Yes. Was I delusiona l? A little bit.

So, a question to all of those who are not wealthy, hugely accomplished, and firmly established in the world: Do you regret your studies, and wish that maybe, just maybe, you’d taken a circuitous, Trotteresque route to the ivory tower?