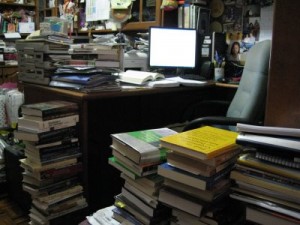 At the annual MLA convention in Seattle last week, humanities professors and university presidents gathered to discuss something they know all too well: dissertations. It’s safe to say that everyone there had written one, holed up for years in the process of jumping through that final, enormous hoop towards the ultimate prize: a PhD.

But they were not there to reminisce about their time as impoverished grad students or discuss ways of keeping the tradition alive. They were there to say enough of all that.

The average PhD in English takes nine years to complete. Nine years! In this day and age, that’s long enough for seismic shifts in the culture to have taken place from matriculation to graduation. And in a field that privileges cutting-edge, timely research, to call choosing an angle within your field a crapshoot would be a gross understatement. And then there’s the problem of that final hoop: dissertations average between 150 and 500 pages, offering laser-beam scrutiny of a highly specific, often obscure aspect of the field. What’s more, no one will ever read these tomes, aside from the committee members who have to, and the skills they require to complete are becoming ever more obsolete in an increasingly digital academia.

So these (successful) academics got together to discuss how to make their charges successful too, upon graduation, and decided that the PhD needs to be updated for the 21st Century.

This could mean less time to earn the degree and, most important, a revised standard for dissertations. But who will be first? Some have argued that elite universities need to be at the vanguard, because if they endorse nontraditional dissertations, then other universities will feel better about following suit.

As Sidonie Smith, an English professor at the University of Michigan and a former MLA president, put it: “We have to change the academy.”

Next post: Come for the cultural dissonance, stay for the chai: Ten ways to best make it through your study abroad days