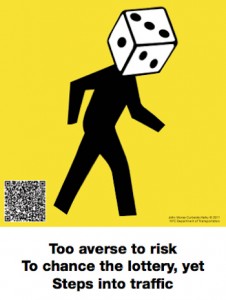 The Metropolitan Transit Authority, or MTA, in New York is not known for a lot of things: reliability, friendly service, cleanliness, reasonable pricing… It’s a sprawling, filthy system that’s made many a New Yorker scream in disbelief every time the fares go up. How dare they cut service, close stations, and charge more to ride on train cars that smell like urine baking on an old radiator?

Ironically, given all that, it is known for its signage. Not the signs that explain service changes, because those are as infuriating and incomprehensible as the service itself, but the signs that advertise new services, offer poetry and prose on subway cars, and celebrate the system that millions of people truly love to hate.

The New York Times once ran an entire article praising the use of a semicolon in an MTA sign.

Which leads me to the point of this post: New York’s latest street signs, 12 in total and placed in 144 in locations throughout the city, which use haikus to advocate safety.

Produced through a collaboration between the Department of Transportation and the Safe Streets Fund, the signs are both clever and graphically brilliant. The only downside, of course, is that they take a bit longer to comprehend than their forebears. And that might prove to be a (fatal) problem.

But leaving practicality aside for the moment — we are, after all, talking about literature, right? — it’s encouraging to see the DOT join the MTA in a stealth effort to keep literacy alive and relevant in the age of iPods and portable video games. Even if people don’t realize it, they’re getting tiny lessons in grammar, punctuation, and the magic of language every time they leave their homes.

In a way, it’s not so different from New York City adding fluoride to its drinking water, banning trans-fats from restaurants, and posting calorie counts on chain-restaurant menus. If New Yorkers aren’ t inclined to take care of themselves, or educate themselves, then by God, City Hall will do it for them.

And if this is what people complain about when they complain about “nanny states,” I say bring on the nannies. We might all learn a few things we should have learned when we really were children.

Next post: I Brought No Italian With Me to Rome

Previous post: Mixed metaphors, and other things to keep you up at night