Mixed metaphors, and other things to keep you up at night 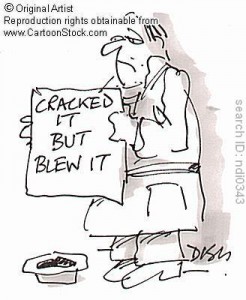 Writers pride themselves on understanding — and caring deeply about — the minutiae of their craft. I once met a writer who had a semicolon tattooed on her forearm. When I asked her why she had such a tattoo, she plainly said, “Because I’m an elitist.”

I got what she meant, and somehow calling herself an elitist magically negated the claim. No one that self-aware could be that much of a jerk, I thought, and even if she was, who cares? I appreciated her passion for the semicolon, a woefully misused and misunderstood little fellow. (I have no reason to think the semicolon is male, but I do.)

We like to think of ourselves as the guardians of such minutiae, which most people don’t think twice about.

So what about mixed metaphors ?

over the counter male enhancement pills

Usually, they’re a sign of sloppy writing, and what’s more, sloppy thinking. Because writing is thinking, and vice versa. But what happens when you mix your metaphors, or commit some other sin against your craft ?

I ask this because I recently wrote an article for a major magazine in which I unwittingly crammed three distinct metaphors into a single, short paragraph. I have yet to submit the article, and I may revise the graph to make it more logically sound. But is this necessary ?

But I’m not convinced. In my own problem graph, I invoke the concepts of “tweaking” an emotional trigger, a “homegrown” business, and a cake’s “icing” to make a single point. Did I say paragraph? It was actually one sentence. That sentence, with its three incompatible concepts, sat there on my computer screen for days, and countless read-throughs, before I realized how problematic it was.

I realized the problem during a 10-mile run, and proceeded to obsess about it for the next few miles, wondering how I could write such schlock. Me, a teacher of writing who begins each semester by scrawling my favorite tenet on the dry-erase board: “Beware the unexamined thought.”

Which makes me wonder: Am I overthinking it? Would Peter Elbow say it’s okay? Or perhaps of more direct importance, would an editor strike the sentence and insert a new one that I did not write?

I’m inclined to think that neither Elbow nor an editor would find fault with it, and may not even notice it.

So what does that make me — a craftsman of the highest order, or merely neurotic?

Next post: Safety and Zen in New York City

Previous post: This must be the place. (Home is where the sea turtles are).