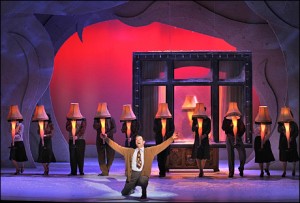 Let me state right up front that I don’ t like musicals. I don’t even like much theater, for that matter. But I have a unique distaste for musicals, which typically lack the compositional sophistication of opera and by definition are not carried by the stuff of a traditional play: namely, acting and dialog.

To me, musicals are alien, often pointless flights of fancy. Just when I’ve begun to follow the story, — that is, just when I’ve almost forgotten that I’m in a overly warm theater on a narrow seat with nowhere to place my arms — the actors break out in song. And the songs they sing are so bad that if I heard them on my clock radio, I’d give the “snooze” button an especially hard whack.

So that’s where I’m coming from. Still, I’d like to know by what rationale Broadway producers select their latest projects. I get that certain musicals have their die-hard fans: Sweeney Todd, Rent, Hair, to name a few that I actually know about. But I’m not talking about those musicals. I want to know why anyone made a musical of Gray Gardens, the Maysles brothers’ direct-cinema documentary about Big and Little Edith Beale, relatives of Jackie O and bona fide crackpots. Why did anyone make a musical of Toxic Avenger, The Lord of the Rings, or Grumpy Old Men?

For the 2011 holiday season, one of my favorite childhood movies will be revived in song on a Broadway stage: A Christmas Story. Th at film, about a young boy in 1950s small-town America who wants nothing more than a BB gun for Christmas, was an instant classic when it came out in 1983. I saw it in the theater and couldn’t wait to see it again, which I did only two years later when it was finally released on VHS.

Why not leave well-enough alone? Doesn’t remaking a cherished work of cinema, or a comic book, or a novel, into something so absurd as a musical — because let’s face it, even if you love musicals, you have to admit that they’re absurd — seem, at best, unnecessary?

Besides, where does it stop ? Will Durant’s The Story of Civilization? My Dinner with Andre? Sophie’s Choice?

Previous post: I Brought No Italian With Me to Rome