by Amanda Leigh Lichtenstein on October 30, 2011 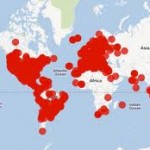 I should be working right now. But I am preoccupied by the occupations. All around the world, from New York City to Rome, Boston to Barcelona, Miami to Moscow, every day citizens have organized to occupy the centres of financial power that have for decades caused and perpetuated gaps between rich and poor.

There’s been a wave of new activism, with unions throwing a wrench in the notion that this kind of activism is just for urban hipsters and disgruntled students. Across the world, it’s the librarian, policeman, nurse, and bus driver, the 99 percent of us who have nothing much else to lose but our dignity, lest we fight for a paradigm shift, for what poet Seamus Heaney calls that  “great sea change on the far side of revenge.”

I’m watching the beat downs and the shut-downs. The sign-makers and the heart-breakers. Children on the shoulders of adults, watching the world wrestle with its legacies.

And I’m watching this occupation unfold with awe from my island perch, wondering how these global pulses will grip local realities. I wish I could say that the people of Zanzibar have been seized by this same spirit of activism to question power and fight for equality, but all’s relatively quiet on that front over here, at least on the surface of things.

Occupy Stone Town? I am not sure where our financial nexus might be or what it would like for local people to occupy, say, the State House. Perhaps it’d be more like an occupation of the grandest hotels, the cleanest, most posh renovations currently housing expats and the wealthy, connected folk at the crème.

Seriously, though. I am really moved by all the people around the world who are responding to global crisis with local action. One of the most irritating things about grad school was the theory loop, that fascinating merry-go-round of passion that spun out in rusted intellectual splendour because we couldn’t take those gallant plastic theoretical horses and ride them out into the great beyond of the real world. So to see people across the globe drag their sleeping bags onto the political lawn is at least a start.

And the fact that I’m directing a language program paid for by federal dollars, a program that entitles its young scholars and fellows to believe they actually earned their right to study abroad, makes me ache even more to go home some days, wondering if I wasn’t sort of left behind in the world’s collective attempt to actually topple the inequalities that have plagued societies all over the world. I wish I was home making posters and calls. I wish I was home figuring out a way to actually be home in a new, fairer home.

I also wish it was just that easy to strike the protest match here, that my enthusiasm for change in general would somehow catch fire on this tiny island, as it has in so many other places around the world. So why hasn’t it?

In many ways, the act of occupying any space is in itself a luxury. Most people here are occupied by the daily reality of having to meet basic needs. Yes, the 1% are living large in air-conditioned mansions by the sea run by a staff of servants, but the other 99% might not be able to afford time off from their lives, even if they were swept up by the tidal wave of justice rolling through the world. But perhaps that begs the eternal question: can revolutions really be the bread that feeds the soul ?

When the “Arab Spring” was sprung on Zanzibar televisions, most watched from a distance, marveling the changes but not necessarily embodying them. It was happening “over there.”

And when Gaddafi’s government began to stumble, and then fall, it was the opinion of many in Zanzibar that the Libyans really had nothing much to complain about – after all, a majority were being fed, clothed, educated, and sheltered without much individual effort. Newlyweds were given $50,000 dollar grants to purchase and furnish their nesting apartments. Young Libyans were being sent around the world to study and learn at world-class universities. Gaddafi himself was the revolution, embodied. He was the collective fist waved against the imperial west.

Many people in Zanzibar argued that life was not that bad under the revolutionary leader, and so what’s the point of a bloody, NATO-pocked revolution?

Instead, throughout those January days in Tunisia and Egypt, and the rest of the Middle East, Zanzibari people puzzled over their own ongoing (albeit insular) questions regarding a new constitution that would reconfigure the politics that have led to the gross victimization experienced by most on the island. As leader after leader either tumbled or stepped down, it did not seem as though a similar match might be lit here on the ground.

And at least in the last two months, Zanzibar seems to have been preoccupied by another kind of occupation: the presence of violent crime that has been escalating in scope and intensity.

Zanzibar is no stranger to violence, having experienced political clashes that still lurk in the minds of local residents as periods of fear and horror. But still, there’s been a pride associated with the relative peace that’s reigned on the island for quite some time, and the fact that there has now been a rash of armed robberies and even a rape in the not so distant past is causing alarm amongst residents and travellers alike.

With each criminal act on the tiny island, there’s been increasing fear, rage, and blame all around, a panic to find the source and reason for such devastating change in the overall sense of peace and security here. A petition of solidarity was started to protest the violence, but there’s been a jagged reaction to who’s signing the online document and what’s at stake by actually standing up and standing out.

Inevitably, xenophobia h as served as a catchall for all the social stresses plaguing Stone Town and the rest of the island. For every violent crime, Stone Town residents are quick to assure you that it wasn’t a Zanzibari person who committed the crime – it was someone from bara (mainland). And whether that is always true or not is hard to trace, since few of these crimes are ever fully reported or if reported, tried in court.

Zanzibar’s tumultuous relationship with bara has been fuelled by the politics of a fragile union between two governments, a conflict dating back to the revolution. The tension seems fair enough, but continually pinning every crime on “other” is a convenient way to distract from questioning what can be done here and now to stand for peace, no matter the victim or perpetrator’s roots.

I am clearly outsider – bara of the bara of the bara. Yet, I wonder why consensus-building around an issue as cross-cutting as violent crime isn’t easier to rally around among local residents. Just under one hundred people have signed this petition, yet there’s been no real consensus around organizing for change. And no real leadership has emerged, no guidelines for occupying, say, the police station, or the streets, even, in the name of peace.

Is it because the whole Occupy movement is an inherently Western concept? I’d say yes except that we just watched revolutions sweep across some of the most conservative, non-Western governments in the world. Is it because there are simply inherent tensions on an isl and between local and non-local, so much so that consensus is a contrarian construct?

In the two years I’ve lived in Zanzibar, I’ve seen a huge spike in a kind of right-wing rhetoric that glorifies Swahili culture and identity as a kind of response to the evils perceived as infiltrating the island from the outside. A way of protecting, preserving, resisting, recasting.

I respect and sympathize with the island’s feeling of vulnerability and lack of power against forces greater than itself. It’s true that not all foreigners who come to Zanzibar have the best interests of local people in mind. People are struggling here. Maisha maguma (difficult life) is the reality for most.

I suppose not all occupations translate in the same way. Occupying Stone Town would have to reckon with two thousand years of occupation. Technically, Zanzibar’s been “occupied” plenty of times — the Persians, the Portuguese, the Germans, the British, the Sultans of Oman, even the Americans. And today, Stone Town already feels taken over, occupied by forces and fears not inherently Zanzibari in scope or consequence. Any kind of protest here: Kusimama (to stand) Kusema (to speak) Kupiga kelele (to yell) could be fast and fatal.

So, what’s keeping Zanzibar off the global occupy map ? A recent attempt at even a protest in Dar es Salaam was supposedly canceled due to fears of police backlash: http://thecitizen.co.tz/news/4-national-news/16568-ngos-bow-to-police-call-off-demo.

Is it possible to rally for a better, more egalitarian, inclusive, and ultimately peaceful Zanzibar, with Zanzibar voices at the helm?