A lament on Steve Jobs — the man, not the god 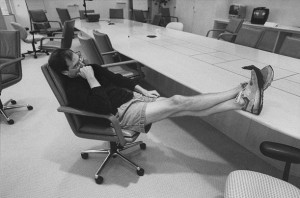 I learned of Steve Jobs’s death the way millions of people probably did: by turning on my MacBook. There, on the Apple homepage, was a photo of Jobs and the years 1955-2011. I was shocked, but not terribly so. His cancer and departure from Apple in August were never secret, and everyone following the situation knew why he left.

Jobs knew how to run a company, and w hen he felt he couldn’t run it effectively anymore, he took his leave. It takes a lot of courage to do that.

Jobs also changed the world, and introduced us to our future when he rolled out the Macintosh 27 years ago. He then crafted and delivered that future, with iMacs, MacBooks, iPods, iTunes, iPads… The company didn’t dub its suite of programs “iLife” for nothing.

But w as Jobs a saint? Was he a person of great holiness, virtue, or benevolence? Did he truly deliver unto the world a better way of life that has facilitated peace and global understanding?

The way we communicate now is inseparable from the products and technologies that Jobs helped create. Everything from design and filmmaking to keeping in touch with our friends has been affected by Apple products, and the industry had to keep pace with Apple’s extraordinary R&D team to stay competitive. And the products rock. I write this on a four-and-a-half-year-old MacBook Pro, and it still runs like a dream. (Sorry Bill Gates, you never treated me this good.)

But back to the saint question: On Facebook, scores of people weighed in yesterday with thoughts on Jobs that downright deify the man. No one mentioned that he was a billionaire who didn’t believe in philanthropy, or that his searing temper often inspired more fear than awe in his employees. Lots of people mentioned that he dated Joan Baez (good for Jobs’s post-hippie persona), but no one mentioned that he allegedly did so because she’d once been Bob Dylan’s lover, with whom Jobs had long been enthralled (not just bad for his image, but a bit creepy, too).

I grew up with Apple products and I like them a lot. I’ll also go on record saying that Steve Jobs did a great deal to improve our lives. Somebody was going to dominate the world of personal computing and high-tech gadgetry, and I’m glad it was him. But maybe we should all take a step back from the hero worship and ask ourselves, just who was this guy?

Previous post: Knox is free, thanks (or no thanks?) to the media