Screw your spirit of inquiry, make us lots of money. 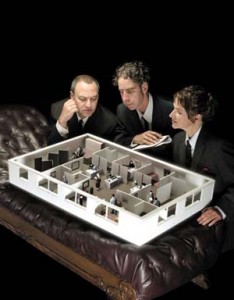 A still from the 2003 Canadian documentary, "The Corporation"

Executives at Deutsche Bank in Germany thought they had a brilliant idea: give two German universities about $17 million over four years, starting in 2007, to fund a program that would really give something back. But not to society, exactly. Back to Deutsche Bank.

The Quantitative Products Laboratory was housed at Humboldt University and the Technical University of Berlin, which the bank partnered with ostensibly to help advance applied mathematics in higher education . Nothing wrong with that, and it’s not unusual for a corporation to give money to a university. But it is unusual for the corporation to stipulate in the deal that it has say over who’s hired to teach, to steer the curriculum towards self-serving ideologies (like free markets and deregulation), and to appoint its own employees as adjunct professors. The bank even reviewed any research produced in the Lab as much as 60 days prior to publication and could withhold its release for up to two years.

This is not just unusual (though, sadly, not unprecedented); it’s ethically unacceptable. If a corporation controls what goes on in the classroom, who’s to say that students are getting real educations? In other words, where is the freedom of thought in a system that preaches the values and agenda of a massive, multi-national bank ?

Fortun ately, the secret got out when Peter Grottian, a professor emeritus from Humboldt, became a shareholder at Deutsche Bank last month. Is the operative word in that sentence “emeritus”? Is it because Grottian comes from an earlier era, one that maintained a sharp distinction between private interest and academic study, that he smelled something rotten in the deal ?

After all, the program had nearly completed its four-year run before it was exposed. Did no one else, in all that time, ever stop and ask, “What the hell is going on here?”

Previous post: Glamorous repression: a review of an unpublished review