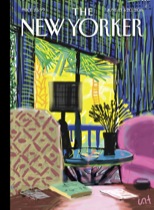 Yesterday, the Summer Fiction Issue of the New Yorker arrived. I think I may have squealed. The table of contents listed the nonfiction of Jhumpa Lahiri and Aleksandar Hemon and Vladimir Nabokov; essays on “Starting Out,” or becoming a writer, by Jennifer Egan, Junot Diaz, Edward P. Jones, and Tea Obreht; and the fiction of two writers new to me, George Saunders and Jeffrey Eugenides.

Does life get any better? For a girl with too many books for her bookshelves, a recently conferred advanced degree in English literature, and little employment for the summer, I think not.

I feel a sense of kinship with these writers, not in the “identity politics” sense so often derided in academia, but in the literal, real sense of having experiences and thoughts in common. (Side note: I don’t want to use footnotes, because they both bother me and alienate people – David Foster Wallace’s Editor’s Introduction to the Best American Essays of 2007 did that to me just the other day – but I want to be clear: I use the word “real” here in the sense that children think of it – alive and true! – not in the manner in which academics use it, for to them and their profession it is heretical to even think that such a thing as “real” exists.) Egan’s “Archeology,” her essay on becoming a writer, struck me for not only its similarities with my own experience, but for its nostalgic, idealistic undertones.  She begins: “When my longtime ambition of becoming a surgeon was derailed by the onset of adolescent squeamishness—specifically a dread of blood—I turned to archeology.”

I know many of us have ambitio us dreams, but it seems to me that sometimes writers have peculiar ones. While I don’t think I’m a real writer yet, I want to be – and one of my early dreams was to be an architect. I drew sketches of houses, trying to imitate real blueprints. In high school, I learned that I was not good at geometry, and that being an architect required one to draw. I think I mostly wanted to be an architect so that I could design my own house one day; when my mom informed me that I could work with an architect to design a custom house—that I didn’t have to be one to do so—I let go this architecture fantasy.

I also read Tea Obreht’s “Starting Out,” which she calls “High-School Confidential.” I read it out of jealous curiosity. She and I were born in 1985, and both because we are the same age and because I can be competitive at times, I envy her achievement: a first novel—but more importantly, a voice of her own and the courage to pursue creativity. She has lived in several countries and already has an MFA from Cornell. Her essay begins, “I was an awkward child.” Well, me too. Unruly red hair and a penchant for building houses for beanie babies out of my parents’ recyclables meant that making friends in elementary school wasn’t easy. An “only child”—how I hated that term and all the accusations that accompanied it—I became adept at amusing myself. Whether that meant playing Candyland with a lunchbox, staging a solo play, or writing a short story about a snowman, I usually found something to do. I remember my parents liking my snowman story. I also remember that it was not sophisticated, nor particularly well-written. But it was my beginning, how I “started out,” if you will. Whether that short piece grew out of my longing for enough snow to fall in Georgia to make a snowman, or whether it was the product of boredom, I don’t know. Either way, I recall delighting in it. I had written something—and it was mine!

Lahiri’s longer essay, “Trading Stories,” chronicles her interest, then disinterest, then fear, then renewed interest in the craft of writing. Candid about minor theft and her parents’ (as yet unfulfilled) plans for her, Lahiri writes with such grace that the best way to honor her writing is simply to quote it here:

If writing is a reaction to injustice, or a search for meaning when meaning is taken away, this was that initial experience for me.

… for much of my life, I wanted to belong to a place, either the one my parents came from or to America, spread out before us. When I became a writer my desk became home; there was no need for another. Every story is a foreign territory, which, in the process of writing, is occupied and then abandoned [. . . ] My parents’ refusal to let go or to belong fully to either place is at the heart of what I, in a less literal way, try to accomplish in writing.

As I’ve so far searched for my home as a writer, I’ve experimented with creative nonfiction and fiction, writing about both education and politics, as well as the hurling of a crockpot out a window and the death of a cat named Dexter, respectively. I’m not yet sure where, if ever, I’ll land, but I will always happily reside amid the words of others.

I’m also not sure if –or if so, what – this little bit that I just wrote has any meaning to anyone besides myself. But writing this has reminded me of my beginnings, how I “started out,” and how I let myself get muddled by the demands of the dismal job market, the pressure to achieve, and the general squashing of creativity in our modern society. Yet I know that reading writing leads to more writing, which leads to more thinking, which leads to more writing . . .  and I know that I want to be part of that ever-delightful cycle.

P.S. I’m ambivalent about inserting links. I’m torn between wanting to write something that can be read as traditional, hard-copy prose, and something that is instantly and irreversibly connected to all sorts of other things. I want to make it easy for you, reader, to find the articles to which I refer, but I also have this hope that you’d read my piece without interruption. M aybe th at makes me a controlling writer. But I wish that in this age of so much distraction, reading and writing can be immune from multi-tasking minds. I welcome your thoughts.

Therefore, here are the aforementioned links: