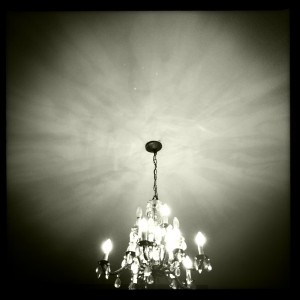 It’s all vague dreamless nights. Nights when dreams are squashed by the intensity of sleep, a forced sleep brought on by pharmaceuticals and anxiety. Mostly, if they come, dreams haunt me before sleep befalls me — in the weird space between the closing of eyes and REM; and then there’s a long quiet nothing as the night passes, eyes closed, fitful breathing. I wish there was more to them that I could manage, more to them that I could remember, because I’m sure that in those vaguely unsettling dreams are the keys to a lot of questions I’d like to ask myself, and therefore the pathways to necessary answers.

The other night there was a drearily dark driving dream, where I drove from the driveways of at least three different homes. At all of them I sought entrance and without getting out of the car I was made to realize that whoever’s homes these belonged to, I was not going to be able to make entrance. Most of the dream was movement from here to there, a kind of vision of being nowhere, going nowhere — a blankness, a circling about from here to there. There was no danger. There was no immediate tension outside the nowhere, the perception on my part that I would not gain entrance. I don’t know how long this went on, as is the case with most dreams I have. Time isn’t the essential quality of the dream-life, but the strange half-life of visions and movement.

When I woke I remember the distinct feeling of having been left alone. I saw no one in those houses, although there was the feeling of them being possessed and the feeling of being gazed upon from windows by the disembodied face of a woman. Upon waking there was the sense of having been left alone — a wicked and perverse loneliness that drew me to tears.  Curtains opened only to be closed quickly and forcefully.  At one house a porch light went out. At still another, a dog was called inside. The sound of crickets.

When I woke I lay crying into my wife’s shoulders. She had been sleeping, and had awoke when she realized that I was moving about — as I do these nights of recurrence, not so much thrashing about, but waving my hands in the air like I was stopping something from happening to me or calling something forward like the men and woman who direct traffic when traffic signals are out of order do.

Emily says to me, and this usually works, “You’re dreaming. You’ve been dreaming.” If I don’t wake up on firs t ca ll, she says, louder, grabbing my shoulder, and my arm which may or may not be flailing about, “Rafa, It’s okay. There’s nothing to it. You’re here.”

This dream left me with tears. I got up and went to the bathroom (out of embarrassment?) and then to the kitchen (shame?) to get something to drink and stood there in the dark crying because the residue of the dream just sat on me, felt like it just had wrapped me in a warm sheath I was unable to get out of. The darkness of the kitchen was thick. I couldn’t see my hands or my body, and it was a reminder of the dream, where much of what I was able to see, the consciousness of everyday things, was absent or at the periphery. Like when you turn to look it’s gone.

When I went back to bed, Emily covered me with her long legs to comfort me. Her body was very warm, and she smelled well of sleep and I hid my face in her blonde hair, as I often do when I am very sick or need comforting or simply for the pleasure of being with my wife. She’s eight months pregnant now and I could feel her belly up against my abdomen (was that a kick? A punch?). She asked, “What was it about?” I was still whimpering, the after-effects of a deep cry. I couldn’t catch my breath. It was the crying of a young boy. Patiently, she rubbed my back for a minute and then I said, waving it off because the answer wasn’t going to meet the strangeness of dislocation the dream championed, I told her, “I just felt alone.”

“Oh, baby,” she said, sad for me, not taking pity, but like a declaration of sadness and also a kind of recognition. Like while she knows not being-with-cancer, she knows well the contours of loneliness.

“I just wasn’t allowed. I was stuck in the driveways.” Sleep had already netted me and had begun to take me back again, out to sea. A wonderful calm began to flood my mind.

“Allowed where? Tell me what you’re talking about.”? “I can’t. I already don’ t remember, bu t it was about the loneliness. I was stuck.”

“Ok. But you’re not. You’re not alone. It may feel that way, right? It might feel like that,” she told me, rubbing her legs against mine, the warmth of her body medicinal itself. I thought of the future, the darker future, when I might get sicker with this wretched cancer, maybe terminal, and there we’d be, only us, her legs warm against my legs, skinny and cold — her trying to keep her husband and the father our child alive with warmth and love, if love could perform such miracles, bringing the dead back to the living. I think about being terminal for what seems like many minutes, but it is only a matter of seconds. I think about it because who wouldn’t after five go around s? Like how many times does one have in them?

She says, “I know what you’re thinking about. Don’t even.” She knows me. She senses it, “the terminal minutes,” I call them, when it’s all I can think of, the skin and bones, the IV tubes, the pain medicine, the bed pans, the family gathering at the side, the lonely, last minutes between husband and wife. I know them in one way, these terminal minutes, which really are seconds (mere flashes), and she knows them in the way of the caregiver. She says, “Don’t you even go there.” If there’s one thing that gets her mad it’s these scenes I produce in my head. I don’t even know if it’s mad, it’s just a sharp rebuke to the darkness of me trying to make sense of the great yawning indifference of nothingness.

“Don’t what?”I ask her, trying to be innocent, looking up at her and taking my face out from the nape of her neck, wiping my eyes with my hands. “What?”

“You know. Don’t think about it, Rafa. You’re nowhere near there and you know it. You know it all the way down there in you. You only had a bad dream.”

“What about the meaning?”

“Let’s leave meaning for morning,” she tells me, a pragmatist my wife is. “Let’s leave it for morning when we’ll be rested enough to tackle the loneliness of driveways. How’s that?”

I laugh because she’s put enough together for us to mine it tomorrow. She’s right. The television has been on and the blue light of it has given the room an illuminative sheen, something dreamlike, almost hallucinatory. “Ok. Ok,” I tell her, giving in.

We stay wrapped within one another, a mix-up of bodies, a smash-up of limbs and hair and hands and feet and she says, “Shhh.” She’s already falling asleep so I don’t know if she’s shushing me to sleep or letting out a long sigh that seems to capture the day we’ve finished and the sleep that we’ll be privy to once we can shake wild dreams from our hair.