One hundred steps: Body-building at the Hindu crematorium 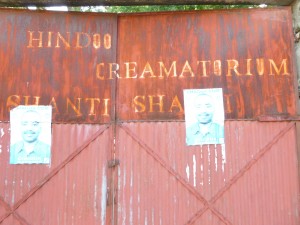 Burning is learning. That’s what our guide at Varanasi’s burning ghats told me and my sister as we stood along the Ganges River, inhaling the smoke and dreams of the formerly alive. I was twenty-eight years old. I thought that life would get easier as I got older. That love would be as natural as breathing. Death itself was a fabulous abstraction, a poem projected in 3-D against the backdrop of the scholarly, angst-ridden film that was my mind’s eye.

I felt elegant and existential along the ghats. Time quick-sanded. My hands were larger than usual. I was too aware of my heart as a kind of wet, red kite tied down by four arterial strings. I cracked clay cups on the ground. Watched the boys in blue slacks fly their red kites, tugging hard on thin strings that seemed the only thing holding down their skinny bodies to the surface of the earth. I horded images of holy men, sadus, swathed in sheets of white and gold.

There, in the chaotic timelessness of Varanasi, we watched people come to die along the Ganges, and having died, be burned, their ashes embraced by the holy river. We walked among the ghats near the pyres. Two brown stumps of a pair of legs. The hand detached from its body, reaching out to farther shores. Bone and teeth, a love letter to the living. I felt sick, sad, and selfish. I wanted more and more, to live and live.

Americans don’t touch our dead. Not in a long while. We’ve licensed people to say our goodbyes for us. We’ve given them God’s notes, according to religion and book, but very few of us are still in the room and stay there till the body’s burned or buried. We’ve moved far away from bathing and whispering, swaddling and praying. But those gestures are still there, impulses roaming the modern body.

And in many places around the world, including here in Zanzibar, people remain close to their dying, their dead, the responsibility and desire falling mostly on the shoulders of family members and friends to prepare the body themselves, without the interference of state or law. When it comes to death, it begins and ends with scripture. It’s a raw affair, up close, and personal. Around the time of the total lunar eclipse, I saw three different bodies on three different days wrapped and carried through the streets, on flat-bed trucks or overhead in mourners’ strong hands. A kind of casualness prevails, a peace.

The Zanzibari Hindus burn the body of their deceased at the only Hindu crematorium on the island, believing that it is the ultimate act of freedom to release the once-bound soul from the body.

I was surprised, then, to realize that this same holy place where bodies are burned is also the favourite local body-building spot for young men. I’d been asking local friends, on behalf of my American students, to recommend good exercise places in town. Over and over again, people kept telling me to go check out ngazi mia, meaning, “one hundred steps.” It’s where everyone goes to exercise, stretch, jog, lift weights, and practice karate and kick-boxing, along the Indian Ocean coast.

I had no idea until I finally visited that these one hundred steps are located within the gates of the Zanzibar’s Hindu crematorium, and that to some, a climb down these steps is a descent of no return. Stone Town’s favourite outdoor gym is literally on the site of an active crematorium, where in the morning the deceased are washed on a clean slab of cement and then carried down those one hundred steps and placed on a large grill-bed to be charred, ashes then tossed into the ocean, waves lapping at the shore.

By late afternoon though, Zanzibar’s body-builders, joggers, karate-choppers, and all around “men of sport” ascend upon this holy site to get their bodies pumping, and they do so in full force, making speedy rounds around the curving foot path that starts at street level and then winds to the base of those one hundred steps, dressed in Adidas running shorts and shirts. There’s all kind of stretching, kicking, twisting, knee-lifting and heavy puff-breathing along the path. When they reach the bottom, there’s a covered cement room with no walls, where lies the rusted bed used to burn the bodies.

Young, muscular men, glistening with sweat, actually use this rusted bed as a base for push-ups, twists, and sit-ups, fresh charcoal still strewn underneath, exposed. Some show off their push ups with one arm, the other arm reaching skyward in perfect form. Other guys lift a foot up on the low-lying bed, chatting with each other until enough space clears for their turn to pump it up in style. 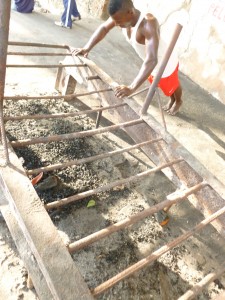 I asked a few guys if it bothered them that a body had just been cremated there in the morning. They looked at me, somewhat puzzled. Like they hadn’t considered it. A silence lingered. And then, one finally answered. No. Why would it? The soul’s already gone far away. This is a good place to exercise.

So these guys pump it up at sea-level by the cremation bed, while other guys just keep running up, around, and down the one hundred steps. Along the way there’s a broke-down cement square-shaped veranda that juts out over the ocean. It has a formerly glorious charm, though now it’s sea-stained and tired. If you feel like taking a rest, you can sit out on the veranda along its stone benches, looking out at the great big sea. Just a few feet below on a wide ledge, young guys perfect their karate-chops, their fighting stances, tucked into low-lying, lush green branches of ancient trees. 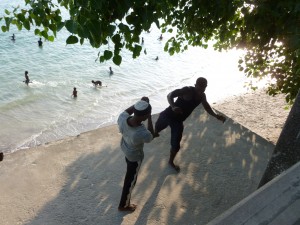 Those one hundred steps are steep. Some do hand or head stands, testing their strength. I saw one guy take all one hundred steps up using his arm strength alone, his legs titled just over his head the whole, wobbly way. 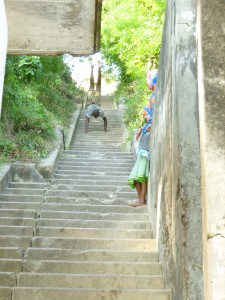 At sea level, children, mostly young, shirtless boys, frolic in the waves, bodies glowing, late afternoon sun drenching them with light. They are loud and playful, screeching as if in conversation with the crows, who perch at death’s cliff, watching with discerned detachment.

The crows will die too one day, without ceremony.

This place made me think about how death sets us free from the desire to be strong.