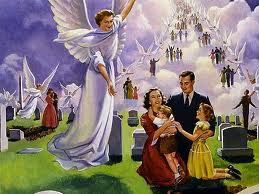 And all these last hours are mini-judgment days. Are we good enough, loved enough, skilled enough, kind enough, strong enough, brave enough, smart enough to go on, pass through it, walk through the doors to the other side of whatever’s waiting for us there, beyond the great abstracts of desire and circumstance.

I’m curious about those last hours. And all the desperate, hell-bent terror bound up in the enormous exaltation of that final hour.

1. The state of being transported by a lofty emotion; ecstasy.

2. An expression of ecstatic feeling. Often used in the plural.

3. The transporting of a person from one place to another, especially to heaven.

to carry off, lift away, catch up (from Latin word: ‘repere’ OR ‘rapio’)

I could tell even from this great distance in Zanzibar that the idea of rapture had gripped American consciousness. I first heard about the rapture obsession sweeping across America through Facebook. There’s not much of a Christian fringe movement here on the island of Zanzibar, but for a week or so, Americans were clearly enraptured. From snarky to hilarious, critical to sympathetic, friends and family buzzed with rapture commentary. A few pulled “rapture stunts”  photographing strewn clothes on front lawns to make it appear as though the elected had been swept away to heaven, leaving their earth-bound shadows behind.

While this was a chance for some to poke fun at what seemed “crazy” and “irrational,” this was really no joke for many. Harold Camping, founder of Radio Family Ministries, based in California, had calculated the beginning of the end of days to start on Saturday May 21, 2011, explaining the bible as a cosmic calendar, a god-clock clicking down the final hours. He and his followers had launched a national campaign to spread the word.

Road trip, people! Camping’s followers arranged R.V.’s, vans, cars and trucks and hit the road, their sole mission being to warn folks. I’d like to hope that they created amazing playlists for their journey, and also treated themselves to the nasty fanfare of roadside eating. Why not treat yourself to a Wendy’s frosty in your last hours, seriously?

I spent my whole day of rapture poolside at Marhubi Palace Villas, just outside of Stone Town, with incredibly brilliant women. Together we represent a little interfaith conference: a Jew, a Muslim, a Christian, and her sweet little baby girl. Over cold drinks, a blazing hot sun, a view of the shimmering blue ocean, sunken and floating boats of all sizes, and a scraggly expanse of untended weed and abandoned garden, we contemplated the end of days, marvelling what others were doing with their final hours, and making peace with the fact that sipping on cold Cokes would be a fine way to go, if perchance, god loved us enough to take us. After all, we’re pretty fine, upstanding ladies, we want to do right by the world.

By Sunday, it was clear that either just a few believers had been transported to heaven (so few we didn’t see them leave) or that Camping’s calculations had been a tragic failure to many who were swept up in the frothy promise of heavenly redemption. No matter how much you believed or didn’t believe, we all know the feeling, perhaps, of being let-down, disappointed by the immense build up of an expectation that falls ominously short of our desires.

But “great disappointments” are sometimes the seeds of new movements, like the Seventh Day Adventists, who were so bummed about the failed prediction of Baptist leader William Miller in 1844 that they regrouped and drafted new beliefs, beginnings, and end-of-days calculations.

Believers say that failed predictions shouldn’t stop us from trying to get the date and time of our last hour, because doing so is our salvation. One rapturous follower said it’d be like telling the Wright Brothers to give up their attempts at flying, having failed countless times before.

Striving is part of faith.

And so May 21, 2011 came and went. Poolside at the palace, a near-distant memory. By Sunday morning,  rapture talk on Facebook had died down and I was tending to a nasty tropical cold while attempting to get housework done and prepare for my last week in Zanzibar before heading back to the States for a quick work-related trip to Washington D.C.

With a mountainous pile of dirty clothes on my floor, a heap of dirty dishes in the sink, my life was feeling a bit out of control, the house itself taking on apocalyptic undertones. I decided that I really needed help with laundry and housekeeping. I invited Salha (20 years) and Bishara (24 years) over hoping that we could hook into our Sunday ritual of washing clothes, cooking, and watching epic Bollywood films on Zanzibar public television. Luckily, they were free and came by at four.

These May days in Zanzibar are blazing hot, humid, and sometimes unbearably rain-drenched. Before getting started, the three of us lounged lazily on the sofas, not feeling like doing any housework at all.

While lounging, I randomly mentioned that many Americans had feared that yesterday was the end of days, but that it wasn’t true. Bishara seemed to startle from her sleepy haze on the couch. End of days? She wanted to know to know more, so I explained what little I knew about Camping and his followers’ beliefs about the beginning of the end.  How people had sold their possessions, quit their jobs, said goodbye to their lovers, went through all the ending rituals in preparation for their last hour here on earth.

My two Swahili friends laughed, hearing about those who’d gone to such great lengths to close down their earthly lives based on Camping’s heavenly predictions. “Why are you laughing?”  I asked. “Because,” Bishara explained with a tone of obviousness, “there’s no way to predict the final hours, we are all at the mercy of Allah to let us know when Qiyamah (Day of Judgment) is upon us.”

And so launched a lengthy explanation of Bishara’s take on the Islamic version of the end of days. What I got, through this Swahili-only conversation, was something of a children’s primer on the Muslim Day of Judgement, which, in its relative simplicity, might make the mighty imams of the world cringe.

Bishara explained that it’s impossible to predict the final day on earth. There are actually many days and at least ten signs leading up to the end of the world, but only Allah knows the final day. And on that day, all people, non-Believers and Believers alike, will experience the total destruction of the world. Floods and monsters, fire and beasts, our world engulfed by cataclysmic rage.

No one knows when it will begin. The sun will descend painfully close to the earth, causing all of us to break out in unbearable sweats and lesions. There will be no relief, water or food. This is a terrifying period of destruction, when all of us will succumb to Allah’s raging disappointment in the failures and horrors of humanity.

Something about the feeling in the room changed as Bishara talked. She sat upright and talked with certainty about what she believed. My boyfriend, too, leaned into the conversation, interjecting that “on this day, God will announce, I am. I’ve come to make good on my promise. Who’s bigger than me? No one is greater than God.”

Salha sat up then, too, listening attentively.

A great flood will sweep everything away and kill everyone. The world will then dry up, and some people will reappear disfigured, their stomachs extended. All the people will miraculously stand up, we will all be the same height, angels will appear. We will all hear the word of God blowing his horns in the desert, calling all us all forward to be judged. The messengers will all be there – an all-stars cast of  Jesus, Mohammed, and Abraham. Have we received Allah’s  message? They will ask. Our files will be reviewed one at a time. On this day, our entire beings can speak – not just our mouths, but our fingers, legs, stomach, every part of our beings.

Those unworthy of heaven will be banished to a classic hell – fire, devils, demons, monsters, suffering, you get the picture.

Those deemed worthy of heaven will find themselves in a blissed out paradise where they can drink and eat whatever they want, consume everything, smoke weed, drink beers, live it up, without ever having to shit or pee. This is a land of milky rivers and waterfalls, honey abundant, the landscape and its people, virginal.

There in heaven, everyone is the same age. No one grows old. We’re all reunited but still must arrange to meet up in the neutral garden, never in one’s individual home, because your heavenly bling depends on just how good you were here on earth. God might have been better to you than your neighbour, so even in heaven, you best not invite your neighbor to your house or he might get jealous.

“The world is not meant to last,” Bishara insists. “”We’re just passing through. Its destruction, too, has been written.”

With all the world’s people gathered on this day of judgement, what language is used?

Bishara explains, “we can’ t speak English or Swahili. We have to speak in Arabic or God won’t understand us.”

“No, absolutely not,” Bishara insisted. She was sure of it.

We did our laundry that early evening with the end of days on our minds, our scrubbing and wringing of wet clothes jolted by an electric shock of awareness that this is all just temporary. We’re all just passing through. We don’t know when, or exactly how the end of days will come, but for at least 98% of the population on the island of Zanzibar, and for millions of Muslims around the world,  it’s a shared belief that this world is all just a micro-dot on the cosmic map, and that there’s a far greater heaven waiting for those of us who believe.

I’ve never been into a punishing god, one who would hurt me for doubting. I’ve somehow come to believe that my doubt defines my faith in something larger and more spiritual than what confines my mind to this particular, freckled body. I would like to think that if there is a heaven, I’ll get there by having doubted that it exists. Is there a religion like that anywhere? I’m not against a cult of faith as long as it confirms what I already believe.  Is faith most beautiful when it can reflect your own image?

I listened in awe that Sunday to Bishara’s telling of Judgment Day with a sense of reverence not necessarily for her beliefs, but for her unbreakable faith. I was attracted that day to her certainty — a state of being that, due to my particular upbringing and thinking practice, I might never get to feel.

And even though I do not share Bishara’s belief in a Day of Judgment, or Camping’s insistence on an exact doomsday, I do love the idea of rapture itself — the possibility, the desire to be carried off, swept off ecstatically to another time and place, a better version of ourselves.

And I’d like to think that every last hour is a potential moment of rapture, that all these “last hours” might hint at redemption, having within them the power to transport us, transform us, carry us off, transcendent, into the next realm of living and loving our way through these very strange days here on earth.