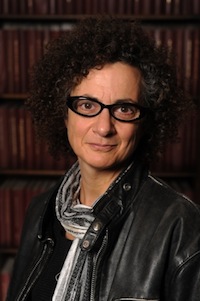 Lauren Berlant speaking on media sensationalism? I couldn’ t miss that. So I found my way to the University of Chicago’s Gleacher Center to have a listen. Only to find out I’d overlooked the comma between media and sensationalism.

Lauren Berlant is an English professor at the University of Chicago, but that title can’t contain her. She’s one of a very few people I would call, without hesitation, an important thinker of our time.

Terms she invented or illuminated will circulate for decades—infantile citizen, intimate public sphere, cruel optimism, workplace precarity, the love plot— a cascade of articles and books will tumble from each.

Terminology is just an easy handle on slippery work. More important is her deployment.

She dismantles obviousness, stuff we don’t even take for granted because we don’t k now to take it, since we don’t know it’ s been granted. She unmasks the deepest mechanisms of subjectivity, the hidden machinery of our lives, the stuff behind the curtain at the end of the long hallway under the transom on the bottom floor of the elevator that we forgot exists.

“It’s really not possible to read Lauren Berlant, “ said political scientist Linda Zerilli, “without the sensation of losing the ground underneath one’s feet.”

So when I heard Lauren Berlant would be speaking on media sensationalism, well, I had to go. I take full responsibility for overlooking the comma, but she took responsibility too. Here’s what she said at the start of her talk:

You know, we kind of got you in here on a scam or something, because the real title for this talk is “On the Desire for the Political,” but the people at the Franke Institute were worried that desire would confuse you, which—that’s what it does.”

Then we got the real talk about the desire for the political, which was great. But first Lauren gave us a hint of what she might have said were she to give us a talk on media and sensationalism, and this is just such a wonderful plate of spaghetti, I think we might like to twirl our forks in it:

What you thought you were going to see was a talk on political sensationalism and you probably thought we were going to have a talk about what’s going on in the political public sphere right now—which is a place where structural antagonisms, in the United States, in qualities of class or race or genderized sexuality or genuine disputes about the role of the state in the production of the good life, or genuine disputes about what the good life is—those kinds of antagonisms get expressed in the political public sphere as a kind of melodrama of action, so people think that their feelings have to be inflated, and that’s what we call media sensationalism, so that there’s no middle ground to anything, that there can only be a higher ground, and so the whole question of the relationship between the melodramatic ground of politics and the higher ground of political fantasy is sort of like what the talk title that you were delivered promised, and the people will start— we’ll start thinking about why people want to feel intimate in their public spheres and what that has to do with inflating emotion.”

This is the talk she didn’t give, what it would have been about. And maybe the ungiving of that talk is a gift, ultimately, because it gives us license to play—to hash something out together.

We can’t reproduce Lauren’s ungiven talk here, only she could do that, but we could have a different conversation, inspired by Lauren’s spark. It might not escape common sense, but so what?

I’m sure Lauren means much more than what I’m about to impose, but here’s a place we can begin.

Not long ago it was impossible to be progressive without being pro-Obama—in November 2008, say.

And then it seemed to become difficult, if not impossible, to be progressive without being anti-Obama—last spring and summer, mainly, when Obama was somehow responsible for BP’s Gulf oil spill amid a suite of other infractions, like those ongoing wars. I felt at both points there was no middle ground. Perhaps there is now. What do you think?

Actually, I’m neither. But there seems to be no middle ground.

You think X, assumes some faction. That means you’re one of us. Here’s the rest of what you think.

Are you for it or against it?

Next post: Jaycee Dugard has a memoir, and it’s all her