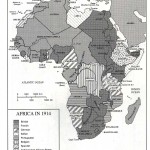 That’s how my professor of Postcolonial Studies began each class last fall. I’m not especially sure how we would feel postcolonial—in fact, a lot of people would say that a group of graduate students at an elite university couldn’t come close to feeling what it’s like be a citizen of a postcolonial nation. Yet I think our professor was trying to ask us if we were aware of the effects of current Western events on postcolonial nations, as well as if we knew what was happening in any of the formerly colonized regions of the world.

Often, someone reported something—but it usually wasn’t what the professor had in mind. In one class, he reminded us that Mario Vargas Llosa had won the Nobel Prize for Literature. In another he talked about human rights abuses in China. One thing we didn’t discuss, however, was silent influence of imperialist discourse in our own country. Postcolonial theory teaches us to:

Clearly, these principles can apply to situations other than the postcolonial. It is my belief (as I have suggested earlier, with the argument that a literary education can foster productive dialogue) that postcolonial theory can be of use to both ordinary citizens and policymakers within the US. An article in the New York Times today about Bill Gates’ role in education reform led me to think not only about education reform in this country, but also about how policies are made.

First, let me acknowledge my own position. I’m a former teacher of low-income adults, struggling middle school students, and nontraditional students returning to college. I’ve also student taught 9th gr ade English in a North Carolina public school and worked in writing centers in two universities. I recently graduated with an MA in English and decided not to pursue further study. Now that I’m finished, I can say that I’m a bit biased against higher education—not the people in it, but its bureaucratic, business-like nature.

That said, my argument here is that an application of postcolonial principles to current political debates—in this case, education—could lead to more open, equitable debates, debates that acknowledge all voices rather than only the ones at the top. The Times article reads like a laundry list of the Gates Foundation’s donations to organizations related to education, including Teacher Plus, Harvard University, Education Week, among many others. The author explains that the Gates Foundation failed to disclose its connections with recipients of its grants, particularly as those recipients went on to advocate (often, successfully) for “reform.” Yet the so-called reforms were based on the Foundation’s idea of what will improve education—not what teachers think, what students think, or what parents think. I imagine the financial situation is even more complicated than the newspaper can portray.

Impractical though it may be, consider what postcolonial thought could offer to the debate over education reform: