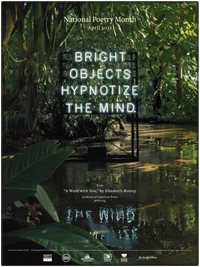 This year's National Poetry Month poster, created by The Academy of American Poets

“April is the cruelest month,” begins T.S. Eliot’s long poem “The Wasteland.” For me, March was particularly brutal. Between first-book contests, journal submission, post-graduate fellowships, and the academic job market, I was rejected for no less than a dozen things. Some of these rejections were easier to take than others (did I really think I’d get a Stegner Fellowship this year?). Some were more difficult (a tenure-track job near family for which I thought I was a lock). In the writing world, excessive rejection is de rigueur, but does knowing that make it any easier ?

Today is April 1st, the beginning of National Poetry Month. I sat down this afternoon to prepare some poems for journal submissions, knowing full well that all of them could be rejected. Why do writers keep writing in an environment filled with rejection, in fields, particularly poetry, which pay very little ? Furthermore, what is one to do when rejection seem to come through every possible portal (the mailbox, the phone, email), and in large doses ? I know writers who hang on to rejection letters, keep them in files, or tape them to walls, to remind themselves to remain humble, or to remember how many times a piece was rejected before it was published. This has never been helpful for me. I’m too easily dispirited to keep memento mori of my failures lying around. I take the wad-up-the-rejection-letter-and-throw-it-with-force-in-the-trash approach, taking particular delight when one lands on something extra funky, like three-day old dinner scraps. Then, I move on.

I’m reminded that Eliot’s first line is an allusion to the opening of “The General Prologue” of Chaucer’s The Canterbury Tales: “Whan that Aprill, with his shoures soote/ The droghte of March hath perced to the roote / And bathed every veyne in swich licour (…).” Chaucer’s poem, unlike Eliot’s “The Wasteland,” goes on to tell the story of a ragtag group of pilgrims traveling together in spring. They drink. They laugh. They make merry. They share (sometimes bawdy) stories. This year, for National Poetry Month, I’d like to remember why so many people decide to write in the first place: to celebrate, to share stories, to illuminate the human condition. I’ll be keeping this in mind as I plug forward through the rejection-laden submissions-end of writing and publishing..

Next post: Over the ‘Transom’ comes a new journal