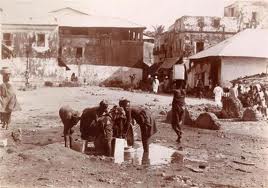 I just had another flurry of rude text message exchanges with my landlord, Mohammed. The subject? Maji. (Water). No running water now for days. No shower. No cooking. No cleaning. No water.

I called him, no answer. Then I texted him. His response? Sijui. (I don’t know [what to tell you.] Texted him again: say what? Siyo kazi yangu. (It’s not my problem). One more time, what? His last text message to me read, “don’t be a stupid.”

In honour of World Water Day, which just passed on March 22, 2011, I feel like it’s time to let my freaky maji flag fly and explain (rant) the water situation here over in Stone Town, Zanzibar, a UNESCO World Heritage site and capitol of the archipelago.

Water shortages here on “paradise” island can sometimes make this city feel like a small hell. Maybe not to the 400,000 long-time city residents, who have lived without reliable, fresh running water in their homes for years; to this mzungu (foreigner) though, a Chicago lake-lady used to gulping copious amounts of tap without thinking twice? Yeah — a life without water is perhaps not worth living.

I wish I could be more lyrical about a water shortage, but there is just nothing poetic about 1.1 million people struggling to secure a basic need. And to be told apparently, through years of neglect, that this particular basic need is not basic enough to warrant a rush on infrastructural change.

Stone Town has no workable water management system, though the city has a few electrically pumped water plants that break down with frequent black outs.  The antiquated distribution system actually consists of asbestos-covered cement, rendering it dysfunctional. The city is also dotted with a few deep wells dug long ago by private citizens and shared haphazardly by local families.

In the early evening, many families send their children out with recycled yellow OKI cooking oil buckets to fetch water from these wells. This, oddly enough, is a charming scene for travelers, who marvel little girls dressed in tattered evening gowns, boys in ragged play clothes, running down the road with their empty buckets clanging behind them on ropes, and then lining up to fill their buckets with well water, sharing the heavy load home two by two. How charming. Tourists snap their pictures. Snap. Snap. Snap. This is daily life in Stone Town. 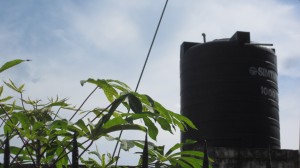 I’m lucky enough to be able to afford to rent a 500-year old restored apartment with the supposed promise of fresh, running water. This is a luxury. A major, major luxury.  We use a 500-liter black tank (that’s nearly 132 gallons) poised on a make-shift shelf in our upstairs neighbor’s kitchen. All three families share this tank and negotiate its daily usage through a switch controlled, at least for a time, from my apartment.

Things went well for a while, peace prevailed, water flowed, especially with just two families living in the space instead of three.

Then our Indian neighbours moved in downstairs, and all three families were now sharing the 500 liter tank. Perhaps this was a cultural thing, maybe not – but we began to notice that our downstairs neighbors used water differently than we did – filling four or five tall buckets daily until nearly all the shared tank-water was depleted. The tap was drying up quicker than before.

We peered down into the open courtyard below (we have an open kitchen where we can see everything) and watched as Raki, head of household, poured endless of buckets of water to scrub clothes, tiles, walls, dishes, pots, pans, shoes, sheets, rugs, windows, mirrors, amazing! She is a cleaning maniac! Seriously, Raki’s water usage is prolific. Epic. Outrageous. We went from switching on the pump every three days, to every day, astounded suddenly by how quickly the tank emptied.

This wasn’t the biggest deal, though, only a mild annoyance, until four days ago, when the water tank burst, collapsed off its flimsy shelf, splashing nearly 500 liters of water into the open courtyard below. No more water tank. No more water flowing through the apartment.

There was Raki and her husband standing on the porch one night, looking bewildered and waterless. We called Mohammed, who said that he would tell us more about the water situation in the morning.

We woke up the next day without showers. Our teeth were brushed with DROP, Zanzibar’s bottled water. When I tried to get answers from my landlord, he became irrationally defensive, even offering to return my 20,000 shilling/month water deposit (about $13.00 USD), forfeiting on his promise, instead of having to at least try to explain the situation.

I want to forgive Mohammed’s ludicrous text messages as the psychological fall out of a severe water crisis — our human sense of helplessness when faced head-on with the consequences of living with fewer and fewer essential resources (and not just write him off as a jerk in any culture, anywhere).

The truth is, even with enormous tanks dependent on unreliable electricity to pump water from a few wells, even with my hopeful deposit to “secure” a water source for the duration, even with switches and home-gadgets to keep the illusion alive, the water crisis is real and impending, with no end in sight.

Over 20 billion dollars from the African Development Bank, the United States, and Japan, among other countries have been poured (no pun intended) into better water management systems over the last five years, including boring new holes, designing new distribution stations, connecting new pipes, and attempting to manage raw sewage to reduce the chances of groundwater contamination. Last month, the World Bank approved a 38 million dollar credit to support urban infrastructural development, including systemic water access (The Citizen Feb. 25, 2011).

Still, no maji for most. There is clearly more demand than supply, and even with people (foreigners and local alike) being willing to pay for this precious source, the systems are not developed enough to accommodate this growing need. And even with occasional cholera breakouts,  gastro-intestinal funk, and other water-borne diseases, there are no, as of yet, concerted rain harvesting efforts (despite a bountiful rainy season) and very little awareness of water conservation or management (see: my downstairs neighbour, sweet Raki).

What’s going on here? What’s the maji hold-up? I know, I know, change takes time. And I’m not going to even try to unpack the story behind why Zanzibar struggles so much with fresh water, even after tons of aide money and attention has been paid to the burgeoning crisis. I don’t want ZAWA after me (Zanzibar Water Authority) or ZMC (Zanzibar Municipal Council).

But I do want access to maji in my life. And I do want the relative security of knowing that my friends, neighbours, colleagues and I won’t have to call in sick with cholera due to a shit river of overflowing sewage water, caused by flooding, stressed pipes, broke down septic tanks,  inadequate dumping sites, or non-existence water-purification treatment plants.

At present, only 45% of all solid waste is actually carried to a sole, rat-infested dumping site 12 kilometers out of town, with the other 55% left out in the open or dumped into the sea, threatening the safety of seafood consumption (Humanitarian News and Analysis, April 25, 2010).

It’s an ugly business, confronting our collective shit reality. As an American, it was relatively easy for me to ignore realities like water and waste. For the most part, it’s all tucked neatly away in water-treatment plants, our pipes and poles processing human waste in the quiet hours. Here, it’s a daily concern, a nagging, low-lying fever of crisis that plagues this picturesque, medieval style labyrinth of a city.

And water walks hand in hand with its equally perplexing sister, electricity.

When I arrived on Zanzibar last February, the entire island was in the midst of a power outage that would last a total of three months. Three months! (December 2009-March 2010). Chalk it up to a “technical failure on the submarine cable from the national grid in mainland Tanzania,” (The Independent February 6, 2010).

Three months without power, and without power, in most cases, no fresh, running water. No one complained about it – in a society that highly values extreme politeness, the Zanzibaris proudly coped with a life lived without electric light, using countless liters of gasoline to fuel noisy generators. Tourism suffered. Families suffered. The sick suffered. But no one protested. 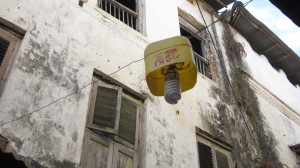 Ironically, Stone Town was one of the first cities in the world to boast electric street lights, even before the British had figured out how to wire their towns. They were also one of the first cities in East Africa to have inter-city train transit from the town of Bububu (whose name is actually train-onamonapeia) to Stone Town. But decades after the first years of lamp-lit glory, electricity is a totally unreliable resource.

But this place has a name: Stone Town is real and rich, vibrant and timeless, a city whose social fabric is being stretched and strained beyond capacity by competing social forces and needs. Which makes me wonder sometimes if I should be here – just one more person among the 100,000 tourists who come every year clawing at their slice of paradise.

But here I am, at least for now. It’s me and my Zanzibari boyfriend in the middle, Raki and her family downstairs, the Filipino karaoke-loving bachelors upstairs, all of us trying to live our daily lives in a city of 399,992 other Stone Town residents. Every person here has their own water story, their own troubling, tense relationship with water. People with names make any crisis realer than real.

There’s at least some consolation knowing that Stone Town is not alone. According to the World Water Day website, this is the first time in human history that most of the world’s population now live in cities. And many of the most stressed cities are found in developing countries. Stone Town sort of missed the message on World Water Day, but I did receive a bumper sticker from ZAWA that reads:

(Every drop counts, use water wisely!)

This Chicago lake-lady is truly humbled, and more aware than ever before of our world’s impending natural resource crisis.

The next time I charge my phone, switch on the water pump, press the remote ON button, read by lamp-light, listen to the radio, turn on the computer, I will say a little prayer for voltage, amps, resistance. The next time I take a shower, wash fresh vegetables, or my hair, or my dirty feet, I will say a little prayer for water. I will speak kind words to water’s molecules.

I love you maji.

*And I forgive you, Mohammed.

Next post: Submission and rejection in National Poetry Month