An academic, a journalist, and a copywriter met on a sidewalk… 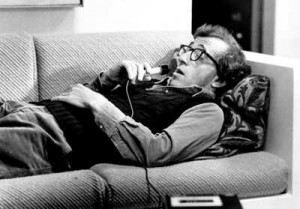 Just about every time I have a conversation with anyone about his or her career, I get an earful of doubts, misgivings, annoyances, and, oftentimes, a nagging sense of futility about the entire enterprise. (And bear with me, the photo to your right will make sense soon enough.)

Case in point: yesterday I ran into a friend who was having coffee at an outdoor patio in my neighborhood. She introduced me to the two friends she was with: an academic working on his dissertation and a copywriter attempting to think of interesting things to say about Band-Aids (or something like that). Meanwhile, I was there to grade papers.

Before long, the copywriter was disparaging her work as “as far as it gets” from the academic’s, no doubt wistfully remembering when she, too, was a student of the humanities; the academic was openly questioning whether a PhD from a state school would ever compete with one from an Ivy, so really, what was the point; and I was describing students who take my class in an attempt to establish a fall-back plan in case their academic careers don’t pan out, yet I can no longer survive solely by writing myself.

In short, it was a real bitch fest. And I’d just met these people.

Meanwhile, another friend of mine — a corporate lawyer whom I met nearly a decade ago in the Master of Arts Program in the Humanities at the University of Chicago — frequently likes to point out that we’re all becoming more and more like characters in a Woody Allen movie. This one’s working on a cookbook, that one’s teaching courses at NYU, and that one’s just moved to Paris to get married and open a music school. We’re not all rich, but damn if we’re not productive. Seems pretty idyllic, right?

Then again, Woody Allen characters are also riddled with angst, despite their accomplishments, wit, and impeccable knack for pairing corduroys and plaids. They’re always — and I mean always — complaining about something. And I love them, I do, but I have to ask: while we may resemble his creations on paper, do we really sound like them too?

Next post: Interference–A glimpse inside the ecstatic cult house of Kibuki spirits

Previous post: The Marlboro Manifesto: Life, liberty and the pursuit of leisure in Denver, Colorado