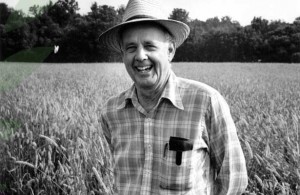 The farmer, simultaneously the most surprising and most deserving of the lot, was Kentucky’s Wendell Berry, man of letters, agriculturalist, and fierce laureate of the natural world. At 76, Berry’s career spans more than 50 years and includes almost as many books, including novels, essays collections, and poetry. He’s not scientifically inclined, like Bill McKibben; he’s not c arved as specific a niche as Michael Pollan. Rather, he’s a writer. His beautifully wrought prose – subtle, sly cadences informed by the soft hills of his native Henry County  – and his polemical sensibility deliver a clear-eyed, intense conviction best summarized by a quote included in his award citation, drawn from The Unsettling of America: “It is wrong to think that bodily health is compatible with spiritual confusion or cultural disorder, or with polluted air and water or impoverished soil.”

Berry’s receipt of the National Humanities medal was both surprising and deserved for the same reason: Berry is a rare bird in American life. Of course Philip Roth got a medal. Who really cares – didn’t he already have one of those? Roth represents – no, is – a version of the great American novelist, and each of his two primary modes, the philosophical and the political, are what we think about when we think about American fiction these days. But even at his most socially engaged, Roth’s politics are, in every sense, political fictions. Gordon Wood? Bernard Baylin? They’re brilliant historians, true, but in many respects they’re much the same guy: Wood was Baylin’s student, after all. More importantly, they’re academic historians whose idea of speaking to the public is a lofty essay in the New York Review of Books (for instance, see Wood’s essay about Jill Lepore in a recent NYRB. Wood makes an interesting if not so shiny and new distinction between memory and history vis a vis the Tea Party, but the fact that Wood then calls Lepore out for being condescending is a succulent irony.). These guys aren’t the same kind of humanist as Berry, and  Berry is the only one of the recipients that actually practices “humanities” in a living sense, in his creative and discursive work. Roth’s an artist, so is Oates. The historians are, well, historians enmeshed in the frenzy of historiography. It’s all wonderful, all essential, but it’s also essentially different.

This begs several questions, of course. What are the humanities, how are they distinguished from the arts? From academics, even those academics underfunded beneath the banner of the humanities? Is there a difference between something like “vernacular humanities” and “professional humanities? These are questions open to interpretation, to discussion, but I submit that Wendell Berry’s quiet engagement, his personal dialectic between questioning and insisting, are the hallmarks of what we should mean when we entertain the seemingly strange idea of “national humanities.”

It’s a sad thing to admit, but my Berry volumes are languishing in a storage space in East Harlem. In lieu of quoting them, here are a couple of quotes from an interview Berry gave to Sojourners in 2004. He speaks better than most of us will ever hope to write:

What is the measure of progress ? It is possible to measure the progress of the last 200 or 300 years in soil erosion. We can measure it in the rate of species extinction. We can measure it in pollution, in the toxicity of the world. Those things, like power and speed, are perfectly measurable. But we need also to raise the questions that are not quantitative. How happy are people? What do we make of all this complainin g? How healthy are people ? How are love and beauty faring? What do we make of all this doctoring and medication that’s going on all the time at such a great expense? That’s not to deny that this so-called progress has given us things that are worth having. A hot bath every night is a good thing. I affirm that it is good, and wish to record my gratitude. There are other good things, but real harms also have been done.

The serious question is whether you’re going to become a warrior community and live by piracy, by taking what you need from other people. I think the only antidote to that is imagination. You have to develop your imagination to the point that permits sympathy to happen. You have to be able to imagine lives that are not yours or the lives of your loved ones or the lives of your neighbors. You have to have at least enough imagination to understand that if you want the benefits of compassion, you must be compassionate. If you want forgiveness you must be forgiving. It’s a difficult business, being human.

Next post: Dear Los Angeles Times, this is a photo of Jennifer Egan

Previous post: Is there ‘aura’ in a replica, or, what would Walter Benjamin say?