Is there ‘aura’ in a replica, or, what would Walter Benjamin say? 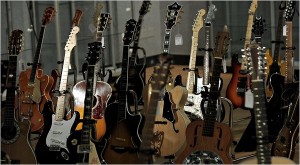 Eric Clapton’s Fender Stratocaster, Blackie, fetched nearly $1 million at auction back in 2004, with all its nicks, scratches, and cigarette burns. Seems like a lot, but hey, it’s ol’ Slowhand’s guitar. He really played “White Room” on it, really passed out while cradling it in his track-marked arms, really dragged it around the world.

But what would you pay for a replica, down to every last blemish ? At a charity auction of the rock icon’s battered old equipment on Wednesday, a remake of Blackie brought in nearly $30,000. That’s a lot of cheese for something the man has never even laid eyes on.

Social scientists at Yale University claim that the remake’s spot-on likeness makes it valuable too. Citing its “imitative magic,” they say even faux Blackie has “aura.”

It’s been a while since I read “The Work of Art in the Age of Mechanical Reproduction,” Walter Benjamin’s essay extolling the virtues of mass producing prints of artwork, which thereby democratizes it and, to some extent, de-fetishizes the originals. But if I remember correctly, he’s very clear about “aura,” a term he applies only to original artifacts (in a slightly pejorative way, at that). What’s more, and correct me if I’m wrong, I believe that Benjamin was the first to use “aura” in that context.

While anyone who would spend $30,000 on a guitar might want to have his head examined, I’m actually more concerned with how these scientists are (mis)interpreting Benjamin. What would he say ?