Simone on the stockyards 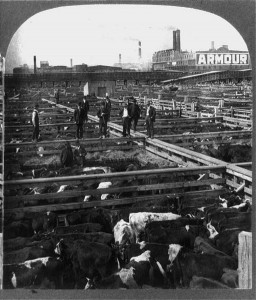 The cattle pens at the Chicago stockyards.

I posted this originally as a test of our blogging software. Now that it has served its purpose, I can’t seem to take it down. Simone de Beauvoir is known for many things, but generally not as a Chicago writer. And yet her writing on Chicago is as eloquent and poignant as the best work by Carl S andburg and Nelson Algren. Here’s an excerpt from the journal she kept when she first visited Chicago in 1947:

By Simone de Beauvoir, from America Day by Day, translated by Carol Cosman

I will not leave Chicago without seeing the slaughterhouses. I know that from all over America, live animals flow into this great center, and they are then sent back across the whole country in the form of canned or frozen meat. The slaughterhouses are quite far from the center of town, and the elevated railway runs for miles and miles above a plain that’s filled with corrals where the cattle are kept. From morning to night, they pour out of the trains that bring them from the West or South, and cowboys on horseback guide the herds into the lanes of this enormous concentration camp. The smell of blood, gamy and rancid, drifts everywhere, even into the railway cars. When I climb down the station stairs, it catches in my throat, and even though I tried hard to harden my heart in advance, nausea sweeps over me with every breath….

I go down, walk through the stench, and then go up to an office where five or six people are waiting. The guide opens the door; it’s as though we were going to visit a museum. But at the end of the long wooden gallery, a sign warns us, “Faint-hearted people should stay at the door.” Everyone goes in…. In the hot smell of blood, in the dull light of the hall where iron knives gleam, two dramas are superimposed: men against animals and men among themselves. It’s no accident that the bloody arms carving up the carcasses are nearly all black arms under their red-stained gloves. Slaughterhouse work is arduous, and the history of the slaughterhouses is one of the darkest chapters in the history of American labor–a story of strikes and racial battles….

I watch the cattle, felled by the mallet and still shuddering, roll through a trap door onto the tile floor. A hook grabs them and hoists them up, and an arm wielding a knife severs their artery and their life. They are decapitated and their legs draped in a large white cloth; carts carry away enormous blue entrails and buckets of foaming blood. Basins of water are emptied onto the tiles, and the metal gleams with murderous reflections against the red ground. This colossal slaughter is the visible tragedy, but it’s only the symbol of another, deeper tragedy. In order to live, man consumes non-human lives, but he also feeds on the lives of other humans. It suddenly strikes me that the blades slicing the wounded meat, all this carnage of blood and steel, are there only to illuminate the awful meaning of that natural law to which we’re inured from birth–man is an animal that eats.