A remembrance of Miriam Hansen 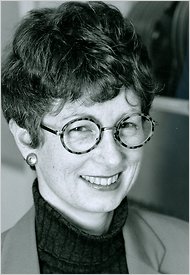 I learned of Miriam Hansen’s death the way most of the world did, from the New York Times Sunday edition. Hers was a featured obituary in the paper that day, one of two that got  full write-ups. This is a testament to the influence Hansen had on film scholarship during her luminous, 35-year career in that field. I was lucky enough to have taken two courses with Professor Hansen in 2002 and 2003, while earning my MA in the humanities at the University of Chicago, where she taught for 21 years. Please refer to her obituary for an efficient account of her contribution to the bourgeoning field of film studies, which she was instrumental in creating. This post is about what I remember of her as a teac her.

She was tough. Though a petite, soft-spoken woman with a German accent rounded out by decades in the U.S., Hansen was the kind of professor who gives the U of C its reputation for serious intellectual work. She read our work closely, and not even the slightest flaw in an argument, internal contradiction, or missed connection escaped her scrutiny. She took her responsibility as a teacher seriously, and treated her students as colleagues.

But she was also warm, in her way. Though she could be unequivocal in dealing with comments that she did not believe had any merit — she used to pause after such comments, look around the room, and simply ask, “Does anyone agree?” to a roomful of silent, unblinking faces — she had a funny way of making me feel okay about missing the mark so metimes. Maybe it was her accessibility. Maybe it was her smile. Maybe it was the fact that she took each new comment on its own terms, and never seemed to let a failed attempt to theorize or interpret a text or film color her view of someone long-term. Whatever it was, Professor Hansen made a deep impressi on, and her influence on me has come through in my own teaching career over the past eight years.

Hansen was 61 when she died on February 5th, after struggling with cancer off and on for many years. She was born to Jewish parents who had escaped the Holocaust and returned from exile only after WWII had ended. She finished her PhD at 26, moved to the United States, and taught at Yale and Rutgers University before joining the English department at the University of Chicago, where she helped found the Committee on Cinema and Media Studies (now a bona fide department). At a school that’s famous for being academically conservative, though rigorous, such a committee was no less than revolutionary.

It was a privilege to have known and studied with her, and I am sure that she will be deeply missed by colleagues, former students, and fans of her scholarship.