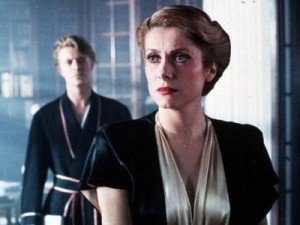 Those eyes. She’s starting to crave her next story.

Whenever I’m away from journalism for any spell of days it tugs at me like the junk. I dream of it, writing stories in my sleep. I recall its abundant glories—the hound-dog lust of a good story, of being completely possessed by its scent, an utter servant first to its research and then to its succinct and potent expression, the clear telos of the capture, the deadline, the splash of it all crashing in the morning on the doorstep.

With increasing nostalgia I recall the culture of the brick and mortar newsroom, with its pica poles and sizing wheels and red wax pencils, its radioactive terminals, its rogues and ruffians, its paupers and poets, its blunt seekers and speakers of truth. I’ve had the pleasure of rubbing elbows with power brokers, politicians, academics, courtiers… and that experience has made me love journalists all the more. As a culture, they shoot straight.

But there is a darker side to journalism that those imperious cravings sublimate. Often when we’re owned by a story like a hound on the scent we’re not thinking at all about the next story, the one we have to write as soon as tomorrow.

Five minutes beyond that satisfying slap of the paper on the doorstep the hunger begins anew: what’s next? What have you written lately? And if that hunger isn’t fast sated, it can turn a gruesome green—into a shaking, salivating starve.

In an enterprise in which writing has a shelf life of a week, or a day, or—these days—a few hours before it lines the proverbial birdcage, we know too well we’re only as good as what we published a minute ago.

This is why experienced journalists keep a notebook full of next stories. It’s not to be diligent workers with pride in their productivity. It’s to stave off the stark emptiness, the sheer fear, the junk sick, as Burroughs would call it—the hunger.

Next post: What Mary Oliver has done with her one wild and precious life