by Cynthia Newberry Martin on February 15, 2011

What a great name for a little boy. And for the title of Summer Wood‘s second novel, out today from Bloomsbury [no spoilers].

Chapter One begins with these two sentences:

It was the middle of the afternoon, January 1969, and a half-hearted rain dampened San Francisco and cast a gloomy pall over the hallways of the Social Welfare building.

Len stood waiting for his life to change.

On page 13, there’s a space break, and the reader thinks now we’re going to move in close to Wrecker, but no, we ricochet off him.

They thought of him as a puppy and took him in.

Like those at Bow Farm, we circle him. He’s apt to run off, and we try not to lose him.

It turns out the book is less about Wrecker than it is about how Wrecker affects the lives of those around him–Len, Meg, Melody, Ruth, Willow, and Johnny Appleseed.

And that narrative approach couldn’t be more fitting for a story about a little boy named Wrecker:

Who at 3 “seemed to need to feel his body collide with the physical world to know he existed.”

And at 8 “still harbored that same dangerous mix of curiosity and enthusiasm and utter lack of caution that he’d come with.”

On page 92, Willow says to Melody about raising a child:

“Easy?” Willow gave a little laugh. “Easy’s not even on the spectrum. Try all-consuming. Try heart-breaking. You might start by giving up everything you ever wanted just to do this one thing…” 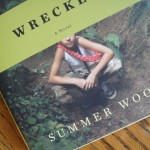 An engaging story. Lovely writing. Soft, recycled pages “made from wood grown in well-managed forests.” On Monday, February 28, 2011, at 7:30 PM, Summer will be reading from Wrecker at Powell’s Books on Hawthorne in Portland.