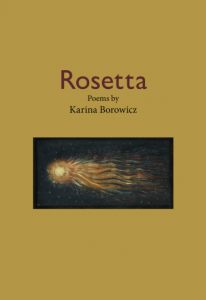 Excuse our French, but our raison d’etre is to support young writers, so we were cheered to receive this news from Ben Admussen:

“Contrary was the first journal to publish Karina Borowicz, many years ago, so I thought your readers might be interested to know that her third poetry collection, Rosetta, has won the Ex Ophidia Prize.”

Here’s a retelling of our early encounters with Karina Borowicz, beginning with the first poem she sent to us in 2005, with links to her poems in our pages:

In 2005 we received an email from Moscow. The email didn’t say anything—not a word—but there was a file attached, and the file contained one of the most contrary prose poems we had seen—”The Maintenance of Public Order.” We published that poem and struck up a fragile correspondence with the elusive poet who had sent it.

She was a Massachusetts born teacher, translator, and writer, we learned, wandering the frostbitten edges of Eastern Europe, just beginning to write poems and send them into the world. We encouraged her to send more of them to us.

Later in 2005 we published “In a Certain Light.” And in 2006, we featured three of her poems on our cover, declaring:

We know very little about Karina Borowicz… but we know all we need to know about her work. She captures the unbearable pulse of despair and hope in the world as its people pass across it, scarcely aware.”

Then, as quickly as she had appeared, Karina Borowicz disappeared. She stopped sending poems. Our Russian agents lost her trail.

She had returned to America, we found out later, and vanished into the MFA program at the University of New Hampshire—encouraged in part, she tells us now, by her debut publications in Contrary.

At New Hampshire she won the Richard J. Shea Award for Poetry, then she interned for the Paris Review, and then she put together her forthcoming book, The Bees Are Waiting.

And now, another kind of homecoming, as Karina brings new work to these pages. The new and the old:

In a Certain Light

The Maintenance of Public Order