Confessions of a standardized test writer 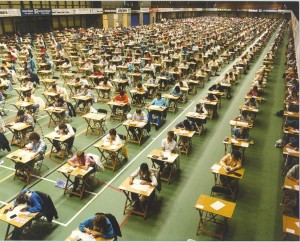 In the fall of 2011, I was invited to prepare an essay for the American College Testing exam, better known as the ACT. If you live on the East or West Coasts, you’ve probably never heard of it; if you live in the Midwest or the South, it hangs over your future like a guillotine from the day you start school until the day you drag yourself out of bed at dawn one Saturday morning during your junior year of high school to subject yourself to its judgement.

The ACT is the SAT for flyover country. It’s pretty much the same test, but scored differently — rather than a 1600-point scale, it’s a mere 36. Each one of those points matters — a lot.

Over the next two years, writing for the ACT was a regular part-time job, and I loved it. As a freelance writer, I like any job I get that pays me to write, and the ACT paid me pretty well. As for the work itself, I liked controlling the effect of a given essay or question, knowing full well that it would be either easy or maddening to interpret or answer. I’d deliberately bury some nuance in an otherwise straightforward essay, or write a particularly hard question and then follow it with a “gimme.” I felt like the puppet master of countless anxious 17-year-olds in high school libraries and gymnasiums across the country.

I also enjoyed the irony that I was charged with this task despite having bombed the ACT myself, back in 1992. In the self-protetective, pride-preserving parlance of students everywhere, I simply don’t test well and never have. (I took the exam again the following semester and did okay, and again after I got into college just to see how I’d do without any pressure, but my scores were never ones I’d care to share publicly.) That I of all people would enjoy partaking in this torturous rite of passage is something I should probably bring to my psychoanalyst, but that’s another matter.

In today’s New York Times, an English professor named Jennifer Finney Boylan writes that while the SAT is moving in the right direction as it eliminates large sections of the exam, what should really be eliminated is the exam itself. “The SAT is a mind-numbing, stress-inducing ritual of torture,” she writes, adding that “the College Board can change the test all it likes, but no single exam, given on a single day, should determine anyone’s fate. The fact that we have been using this test to perform exactly this function for generations now is a national scandal.”

She continues with well-worn arguments, which have been around since I began high school in the late 1980s: “It measures memorization, not intelligence. It favors the rich, who can afford preparatory crash courses. It freaks students out so completely that they cannot even think.”

I can’t argue with her. Like the SAT, the ACT does all of these things — I should know, I took it three times. The only thing it really measures is one’s ability to prepare for the test itself. And while the ACT, at least, has made a real effort to favor middle-class white people less than it once did, and you could argue that “studying for the test” is good training for the kinds of insulated, highly specific, often absurd tasks that many jobs require, the exam itself does not, as Boylan writes, accurately reflect anyone’s intelligence or even their aptitude to perform well in school.

I haven’t written an essay or question set for the ACT in several months, in part because the questions, at least, are now being written in-house. The essays are still written by freelance writers — beyond being a good writer, you also have to be currently teaching at a college or university to be eligible — but I’ve begun feeling a little uneasy about the work. It seems tantamount to being a vegetarian who works at a slaughterhouse. I also started to feel that in its efforts to be more egalitarian, the ACT has become far too limiting. I never realized just how many subjects in the world might be either offensive or alienating or inaccessible to someone until I started writing short essays that were supposed to be none of those things. Everything, it seems, is problematic.

I won’t say I’ll never write another essay for the ACT, or even the SAT or GRE if given the opportunity. It’s work, and I need to eat. But it won’t be without feeling like I’ve sold out, at least a little. Eventually, all those kids I’ve helped torture will understand. Right?