The listicle as literature (?) 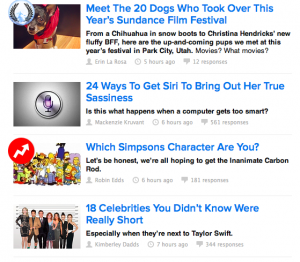 I am to the listicle what my parents were to the Beastie Boys. When I was 11 years old, in 1986, I thought the Beasties were the greatest musicians of all time, and yes, I was including Beethoven, the Beatles, and Simon & Garfunkel in that valuation. My parents, meanwhile, laughed and rolled their eyes, but secretly worried about the future of civilization.

And so it is with me every time I log onto Facebook and see yet another list of “12 Hollywood actors having bad hair days” or “21 cats who look like their owners.” What about real news? I wonder. What is happening to us?

I admit, some of these lists are pretty damn funny, and some are even interesting. But I almost always feel like I just lost three minutes of my life after reading one. Like for every listicle I read, I missed something that actually matters — like the latest horrors unfolding in Syria.

Cynically, I start wondering if this is all part of some government plot to distract us from important topics so that we won’t really notice when, say, Obama renegs on his promise to impose stricter surveillance standards at the NSA, or when the owners of (legal) pot dispensaries in Colorado start getting robbed of millions of dollars in cash because the federal government won’t let them accept credit cards in their shops.

But then I remember that even if the Beastie Boys weren’t Beethoven, they were brilliant at what they did, and they really did change the music scene forever. As did my subsequent favorite bands: Sonic Youth, the Butthole Surfers, and the Pixies. In the mid-80s, none of those bands was yet a household name; today, they’re hailed as pioneers of alternative rock. Sonic Youth has even been featured at the Museum of Modern Art. And I never actually stopped listening to Beethoven, the Beatles, or Simon & Garfunkel.

And yet, I still hate listicles. They feel cheap, stupid, shallow. And yes, distracting.

This essay by Arika Okrent, from the latest University of Chicago alumni magazine, challenges that position. According to Okrent, a PhD in linguistics who now writes for Mental Floss, the listicle is not unlike a limerick or a koan. Each of those forms follows a predictable form, allowing the reader to know exactly where she is in a given “piece,” what is ahead, and when it will end. Moreover, Okrent argues that the listicle has merely formalized something that language has always done: take a mess of information, break it up into discrete elements, and lay it out in a nice, neat line for the sake of comprehension.

When my journalism students know little of Syria or the NSA, but do know “11 facts everyone should know about orca captivity,” I may laugh and roll my eyes while I secretly worry about the future of civilization. But then I have to remember: the Beastie Boys didn’t ruin me for other forms of sonic pleasure, much to my parents’ relief. On the contrary, they merely opened my mind to other possibilities of sound and musical compositions.

Perhaps the listicle, too, might become just another form in the vast, glorious, and unpredictable world of language. After all, I’m not the first person to lament the death of letters. Plenty of early critics said the same about Allan Ginsberg, Ezra Pound, e.e. cummings, Vladimir Nabokov, Henry Miller, D.H. Lawrence…

In other words, only time will tell. But in the meantime, I’m not about to cancel my subscription to the Times.