When writers retire, we feel betrayed. Why? 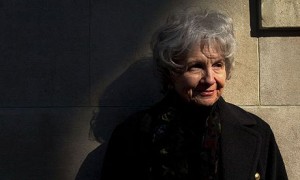 We like writers to be contrary, to stand up to conventions, to assert themselves in opposition to what is quietly and tacitly agreed upon “socially acceptable.” That is, as long as they keep doing it.

When Alice Munro announced recently that she was retiring from writing at age 81, she said she was inspired by Philip Roth’s decision to do the same last year. Roth was 79 at the time, and had won every major American literary prize there is, plus a few others. Munro is no slouch herself, having won the prestigious Booker Prize in 2009 and the Governor General’s Award for Fiction from her home country, Canada, three times.

This might help explain why her announcement of retirement landed her on the front page of the New York Times (at the bottom, admittedly, and only to point readers to the full story in the Arts section, but still). When people like Munro retire, readers are often shocked and may even feel betrayed. How could someone who, to us, is nothing but a writer — and a successful one at that, which automatically places Munro in a coveted position — want to do anything else? If she’s not writing, does she even exist? Who is Alice Munro if not Alice Munro, novelist?

I’ve never read a word by Alice Munro, so I can’t speak to her talents or lament the premature loss of yet another literary voice. I use the word “premature” deliberately, because we have an assumption that as long as a writer breathes, she should be writing too. Only death is an acceptable excuse for not delivering another book, poem, collection of short stories, memoir, or even a series of letters. We expect a prodigious output from our favorite authors and don’t waste time thinking about what they’re doing in the meantime. Sick? They’ll get over it. Lonely? Please. Carpal tunnel? Never thought about that.

It even elicits skepticism about the announcement itself; as soon as people hear an artist is retiring, they start asking if it’s for real.

But why can’t Alice Munro, or Philip Roth, or for that matter, Steven Soderbergh, who also recently announced his retirement from making films, throw in the towel just as acceptably as, say, your dentist? Surely writers too have things they’d like to do besides entering into the dark chasm of creativity virtually every day of their lives. Surely they, too, sometimes just want to watch TV.

It seems obvious that writing, like anything else, is a job that can get exhausting, and that a human being should be free to pursue other things. We’re taught from an early age not to define ourselves by our work, and yet, we hold artists to a different standard. Sure, your dentist has a right to care about something besides your root canal, but a writer — his concern should be the truth. How do you retire from that?

Apparently, by simply telling the world, “Thanks for reading, folks. I’m finally going to learn how to play the piano.” (Or whatever.)

It may just be the most rebellious thing a writer can do.