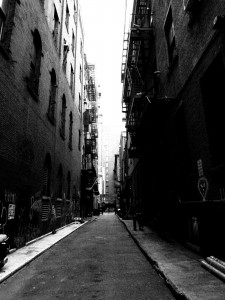 Sometimes justice is served swiftly, sometimes not at all. And sometimes it takes 14 years, but when it’s finally served, it’s delicious.

In an earlier life (i.e., my mid-20s), I was an aspiring arts journalist. And I did pretty well at it, for a kid from the Midwest who moved to New York with nothing more than a college degree and a single six-month internship on his resume. This can be partly attributed to my ambition, but also to history: I moved to New York in 1999, with Clinton’s economic rave still in full swing, and I landed a job in just two months, covering business for a magazine about the dot-com boom and bust in New York City. When I was inevitably laid off from that ill-fated magazine (remember the “bust” part?), I took it as an opportunity and pursued my dream of writing about contemporary art and film. It didn’t take long, but the magazines that gave me freelance work were little-known rags published by independent companies with circulations of maybe 15,000. I wanted to write for the big guns: ARTnews and Art in America. And by 30? The New Yorker for sure.

Around that time, I was also addicted to MediaBistro.com, a jobs site I visited about as frequently as many people do Facebook today. (Pretty much constantly.) One day, as if my prayers had been answered, a shimmering opportunity appeared on my screen: an editorial position at ARTnews. With my heart aflutter and my stomach in knots, I scrutinized the job requirements, verified that I was, miraculously, ideally qualified, and psyched myself up to write the best damn cover letter the editor had ever seen.

I submitted my application and waited, for weeks, never to hear back. Then, about four months later, the same posting appeared again, and while my heart didn’t flutter as much as it did the first time, flutter it did. And once again, I applied. A few months later, the cycle repeated, with decidedly less fluttering. And finally, after about five or six cycles, it dawned on me: this job must really suck.

So I stopped applying. I made do with my smaller publications and ghostwrote a book about Web design, applied to grad school, and moved to Chicago.

Three years later, I’d completed my master’s degree and was living the life of an overeducated, over-experienced, unemployed writer in Chicago, desperate to get back to New York. (Note: if you’re ever overeducated, over-experienced, and unemployed, Chicago is not a city you want to live in.) So there I was, back on MediaBistro, trying to find a job from 800 miles away. Believe me: this was not an easy task. Almost no one seemed interested in someone who couldn’t start work the following week, with one notable exception: the executive editor of ARTnews. I laughed, remembering my previous attempts to court her via carefully wrought cover letters and meticulously tweaked resumes, and decided to give it one more go. If I got the job and it was terrible, at least I’d be back in New York City. And besides, I’d had terrible bosses before and added a few more layers of mental toughness during my Chicago tenure; maybe I could handle what all those other people couldn’t.

I never got to find out. In advance of any interview, she gave me an assignment: pitch five ideas for the magazine about relatively unknown but press-worthy exhibits happening in New York at that very moment. This was in 2004, before Facebook, before Twitter, before Google could predict what you wanted to know before you did. I came up with a few things, none great, and sent them off. Her reply was nasty, curt, and dismissive. Never mind the fact that no one could have accomplished this task from a distance of 800 miles. You might say I was set up to fail.

Why would she bother? Who knows. All I do know is that it’s been 14 years since I first came across that executive editor’s name in a job posting, and while I have never met her personally, in those 14 years she has come to represent to me everything that’s wrong with magazine work: the tacit assumption that it’s perfectly acceptable to ignore would-be employees; treat current employees like dirt because, hey, if they don’t like it, then hundreds of others will line up for their spot; and to pay those who can withstand the pressures of the job a wage that would make a Starbucks employee laugh out loud. Whether this editor is guilty of any of these is beside the point; it’s what her name means to me.

So where’s the vindication? I’ll leave that to Gawker.

Previous post: To write well, first tune out the clatter — if you can